When Ruby Johnson moved to Prentiss with her husband Eural Sr. she had no idea that she would be so involved with the family business, Johnson Funeral Home, that she would be thrust into the position of CEO when her 42-year-old husband suddenly passed. Johnson’s Funeral Home has operated since 1940 in Prentiss and is the oldest family owned African-American business in the county. 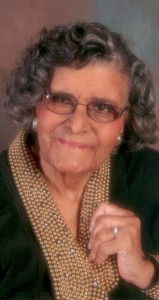 Daughter Dedra Johnson gives us a look into the personal life of this lady who has been an integral part of the community structure of Jeff Davis County.

“As a young girl my mother was taught to be afraid of dead people,” states daughter Dedra. However, her mother-in-law, Frankie, a strong and business savvy lady who herself had to assume the responsibility of the business after her husband’s death, was a good and patient teacher, and along with Johnson’s husband Eural, mentored the young Ruby and she gradually became comfortable with the deceased and channeled her natural compassion to the grieving families.

Eural and Ruby had eight children. When Eural suddenly died of a heart attack in 1975 the oldest was in her early 20s and Dedra, the youngest, was 8 years old. There were six boys between the two girls who suddenly found themselves without a strong father figure. Dedra Johnson says her brothers were strong willed and prone to getting into trouble giving their mother much grief. “Her job was stressful. My mother was naturally a quiet and humble person who didn’t like to be in the spotlight,” states daughter Dedra. “Keeping the business alive and well was a struggle when the role of women as business owners was sometimes looked on as an opportunity to take advantage but she maintained and the business grew and expanded under her leadership.”

Her favorite expression was, “Lord, have mercy!” To many it may have just seemed to be an expression like when someone says, “My goodness” or “OMG” in text language, but it meant much more to Ruby Kennedy Johnson states daughter Dedra. It meant she was so in touch with her Maker whenever an adversity occurred she had her line of communication open to ask for help 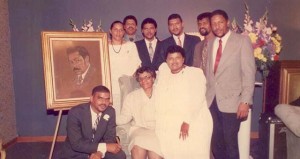 The Prentiss Headlight / Ruby K. Johnson and her children.

from above and those words sustained her.

“Her biggest disadvantage,” Dedra Johnson states, “was that she never learned to drive but as the kids grew up and got licenses she had her drivers to take her where she needed to go. Her compassion flowed to those who struggled to pay and she made financial ‘arrangements’ for those and she didn’t retaliate against those who tried to undermine the business.” 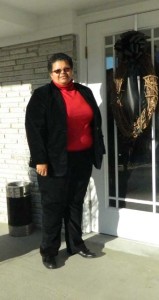 The Prentiss Headlight– Dedra Johnson wants to assure the community that Johnson’s Funeral Home will continue to provide the same personal service the business has been known for in the past.

In 1991 Johnson retired to become the caregiver for her oldest son Eural Jr. who was a brain cancer victim. He passed away in 1993 and she pursued

her love for growing flowers and immersed in activities at her church, Green Grove M. B. Church, but Dedra states this strong vital woman began showing signs of dementia and when Hurricane Katrina devastated the area it seemed to be a turning point. The woman who cared for so many in their time of grief became in need of a full time caregiver. Dedra states she was glad to fill the job and along with sitters and family kept her in her own home until her death Dec. 27, 2015.

“Ruby Johnson was not your typical business woman, not involved in a lot of organizations but was a pillar in the community always at work in the background quietly doing what need to be done. She depended on God to get her through the hard times and taught her children to do the same,” states her youngest daughter. “I hope I can be even half the woman she was,”

Johnson Funeral Home, LLC continues to serve the community with care from those who know what it is like to lose a beloved member of the family. New renovations have made the facilities more comfortable and ready for service. Dedra Johnson and the Johnson family wish to assure the public they will continue to give the same warm personal service the business has been known for in the past. 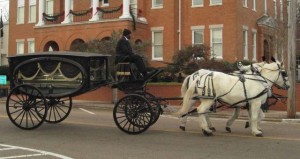 The Prentiss Headlight—Ruby Johnson being carried to her final resting place at Green Grove M.B. Church. 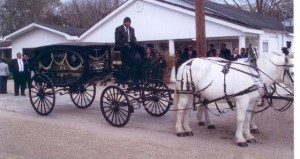 “I just can’t figure out what all the fuss is about,” stated Mabel Bass, “It’s just another birthday.” Mabel Bass,... read more