“I just can’t figure out what all the fuss is about,” stated Mabel Bass, “It’s just another birthday.”

Mabel Bass, who turned 100 years old Jan. 7th, seems to have no conception of how much she is appreciated and loved by those who have been a part of her life over the many years she has been a resident of Jeff Davis County. 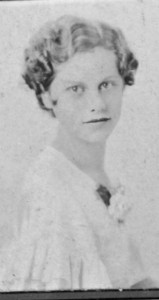 The Prentiss Headlight– Mabel Ellsey Bass came to JDC as a young woman and has been here ever since.

Mabel Ellsey grew up in Walthall County and states her grandmother taught her to sew and quilt but she was also a tomboy who enjoyed hunting and fishing and swimming with her three brothers and two male cousins. She states she did get at doll for Christmas one year but mostly enjoyed making clothes for it.

She graduated from Lexie High School, which Bass states was the largest country high school in the state at that time and attended a junior college on the coast for a year. While on summer vacation she visited a cousin in JDC and took a job at the County Building where she met another employee Curtis Truett Bass. They married and she states she has been here ever since.

Bass has always used her sewing skills and many have benefited from her expertise in that area. She has also helped others to enhance their sewing abilities. Bass worked Speed’s Store and at Love’s Dress Shop doing alterations and made special dresses for many. Wanda Sinclair says she well remembers the beautiful dress Mabel Bass created for her that she wore to her 9th grade prom while others told of wedding apparel and bridesmaid dresses she made. A granddaughter’s wedding dress along with other items including a shirt her son, Curtis Webb had worn as a child, quilts and other creations from over the years were displayed at the reception. Many who were recipients of her skills over the years attended the event held at Whitesand Baptist Church in her honor

“Ms. Mabel opened her house to the quilting club in 2002 after Jean Slater became ill and could no longer have the club meet at her home,” states Francis Bridges, a member of the Annie Lou Hayman Quilting Club. “She taught many of us to quilt. Sometimes we would over think and make something harder to do than it was. We would call on Mabel to show us 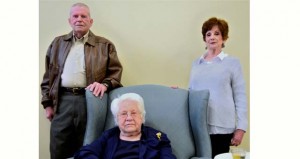 The Prentiss Headlight–Mabel Bass and her children Curtis Webb and Mary Kay Magee.

how to do it. She always made it clear and then it seemed so simple.”

Mabel Bass is now a resident of ECF and states she loves everyone there. She says she doesn’t sew any more but does enjoy reading and participating in the activities at the facility.

When asked to what she attributes her long life and good health Bass states, “It’s just the Lord, that’s all. He has been good to me.”

The Lord has been good to her but her life has not been without its problems. She lost her husband in 1980 and has battled cancer three times. She suffered broken bones in three different incidents of falling and states the first time she ever rode in an ambulance was when she fell and broke her hip.

Now that she is one hundred years old Bass states she plans to do just what she has been doing–enjoying life.