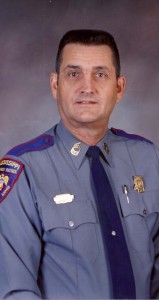 Reggie was born August 13, 1943 in New Hebron, MS to Reggie Dennis Berry and Mattie Slay Berry. He was a member of Old Hebron Baptist Church and served 6 years in the Mississippi Army National guard.

He was a highly respected Mississippi Highway Patrolman, working in the Hattiesburg District. After retiring, Reggie worked at Saulters Moore Funeral home for 17 years before his diagnosis of MDS which led to a Bone Marrow Transplant at M.D. Anderson Cancer Center in Houston TX in 2013.

Reggie is survived by his wife of 47 years, Diann (Beeson) Berry, his son, Russ Berry, and sister Faye Berch, all of New Hebron, MS. He was preceded in death by his parents.

The family would like to express sincere thanks to the many churches, friends, and family who prayed For Reggie during his illness.  Online condolences and a guest registry are available at www.saultersmoorefuneralhome.com.