The History of Clem

The Covington County Genealogical and Historical Society announces “History of Clem” will be the  January 16, 2016 meeting.

Clem was a community in Covington County until it became a part of Jefferson Davis  County in 1906.

The community had a school, post office, cotton gins, churches, and  stores.

When Clem School closed in the  late 1950’s, the students were transferred mostly to Prentiss but some to Pinola and other schools.

Our speaker on Clem, Joe Cosper, met his wife Peggy Roberts of Clem when she transferred to Prentiss.

Joe and Peggy live in Jones County now but they have kept their ties with Clem.

Joe is a researcher of the Stringer, Blackwell, Walters, Allen and other family lines of Jones and Covington County.

His love of history and research make him the logical choice for a program on Clem.

Is Clem a place or a state of mind?  Come and find out at the Seminary Depot, Seminary Mississippi on Saturday, January 16th  10:00 AM. 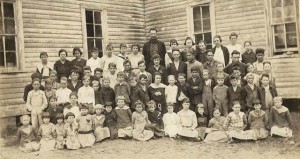 The Prentiss Headlight—Clem School in 1918 made by Berry Photography.