Covington County Genealogical & Historical Society presented their 2015 awards for the Landowner’s Preservation of Historic Burial Grounds during  their Christmas Luncheon at Graham’s Fish Camp on December 12, 2015.

Receiving the honors this year were Lydia Polk for the Cooper Graves and Jerry Mac Magee for the Joseph McInnis Cemetery.

Both of the Burial Grounds are located in the Clem Community of  Jefferson Davis County.  They were eligible for the Covington County award because they were part of this county when the early interments took place.

Lydia Polk was nominated because she; her father, Solon Polk; and several generations of her family have protected the graves of the Cooper family who lived on her property when Mississippi became a state.

Jerry Mac Magee has cleaned and cared for his relatives graves for over forty years.  He lives on the property that was owned by his ancestor Joseph McInnis (1823-1888).

Anyone interested in making a nomination for this award in the future or for more details on the requirements for the award should contact the society or call June Ellis 601-797-3233.

The members elected a slate of officers to serve for the 2016-2017 term.  They are: President Nell Cobb; Vice-Presidents Janet Smith and Janice Kervin; Secretary Cathey Aultman; Treasurer June Ellis; Librarian John I. Rogers.

Seth Ellis, a student at Mt. Olive High School, was awarded a one year membership in CCG&HS for completion of the required volunteer hours with the group.  Any student interested in volunteering and receiving free membership should contact one of the officers for details. 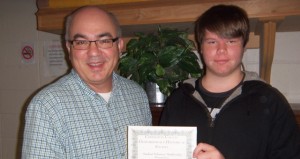 The Prentiss Headlight / Covington County Genealogical & Historical Society President, Bill Rogers, presents Seth Ellis with his certificate for one year free membership in the Society that Seth earned as a volunteer with the group.