Mr. Joe B. Thompson of Bassfield, age 89, passed away on January 20, 2016 at his home in Bassfield after a lengthy illness. Funeral services were held at the Bassfield Baptist Church in Bassfield. Rev. Ken Roberts, Charles Lee Loftin, and Paul Roney officiated.

Mr. Joe was a member of Bassfield Baptist Church where he was a deacon and Sunday School Teacher for more than fifty years.

Mr. Joe was born in Bassfield on June 6, 1926, to R.M. Thompson and Bertha Hathorn Thompson. The fourth of four boys, he attended Bassfield High School graduating in 1943 when he entered the United States Navy serving aboard a landing ship in the Pacific. After being honorably discharged from the Navy at war’s end, he entered 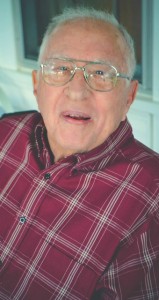 The Prentiss Headlight / Joe B. Thompson

Mississippi State College (now University) on the GI Bill of Rights and worked in the college cafeteria to help pay his way through school. He graduated with an agricultural degree in 1949 and began a career in education that lasted 40 years in the Jefferson Davis County School System. Later that year, he married Allen Fay Bass, also of Bassfield.

Mr. Joe Taught agriculture to veterans in the Veterans Training Program at Bassfield. After a number of years he moved on to teach science at Bassfield High School. He returned to college at USM in 1963 where he earned a Master’s degree in guidance and school administration. Later, he served as guidance counselor, assistant principal and principal of Bassfield High School. While there, he also served as interim superintendent of education for several months while the elected superintendent recovered from a lengthy illness. At Mr. Joe’s retirement in 1989, he was honored by having the Bassfield High School Baseball field named in his honor by the board of education and superintendent. In 2010, the auditorium at the school was also named in his honor. He influenced the lives of countless young people and future community leaders during his storied tenure in education. He was also active all his life in farming on his own farm where he raised crops, cattle, timber and, with his brother John, founded Thompson Farm and Seed Cleaner.

During the course of his long career in public service he was a member of the F & AM Lodge #551, MEA, Chamber of Commerce, Jefferson Davis County Hospital Board of Directors, ASCS Board of Directors, Pine Belt Mental Resources Board of Commissioners and the county Forestry Commission among many others.

He is survived by his wife of 66 years, Faye; Sons, Michael (Wanda) and Patrick of Bassfield; Five grandchildren, Blake Thompson (Jenny), Sara McRaney (Kevin), Deidra Fagan (Chris), Drake Grant (Melody), and Dakota Grant; Seven great grandchildren and many nephews and nieces. He was preceded in death by his parents; two infant daughters; brothers, John Houston and Earl; and sister in law Eleanor.

Pallbearers were Leon Griffith, Earl Hathorn, Sammy Hathorn, Douglas Stein, James Fagan and Kevin Saulters. Honorary Pallbearers are the Deacons of Bassfield Baptist Church. The family would like to thank the countless relatives, church and community members for the prayers, calls, visits and support shown to him and his family during this time in his life. Caregivers Norma Hennis, Edie Ruth Hathorn, Sherry Clinton, and Candice Tidwell are remembered for their many hours of loyal and faithful service. We also want to thank members of the St. Luke Hospice staff for the kindness, care and understanding they exhibited in the last months of his life. All of you will never be forgotten by the family.

Memorials may be made to Bassfield Baptist Church, P.O. Box 115, Bassfield, MS 39421. Online condolences and a guest registry are available at www.saultersmoorefuneralhome.com