Several Jeff Davis pro-lifers join in prayer at the Capitol

Several Jeff Davis County residents attended the 29th Annual Candlelight Prayer Vigil held in the Capitol Building rotunda on Saturday, Jan 16th that brought pro-life advocates from around the state together for a memorial to the more than 60 million unborn children that have been terminated through abortion in the 44 years since the Roe vs. Wade court decision opened the door for legalized abortion in the United States.

In response to the anniversary of this decision, Pro-Life Mississippi and Pastors For Life Mississippi sponsor this event and a service near the one remaining abortion clinic in Mississippi that is located in Jackson.

The memorial service ended in candlelight on the capitol steps while pro-lifers spent moments sending up silent prayer beseeching God’s help for an end to abortion. 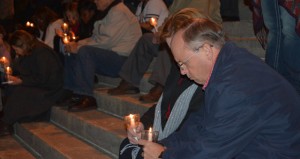 Shirley Burnham / The Prentiss Headlight–Moments in silent prayer to end abortion were observed on the steps of the Capitol that was attended by several for the county including Covington-Jeff Davis Baptist Association Director Bro. Tommy Broom and his wife Lynn.