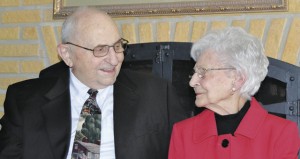 The Prentiss Headlight–Bob and Edith Baughman of Bassfield have been sweethearts for 64 years.

People say that whirlwind romances usually do not stand the test of time but Edith and Bob Baughman of Bassfield would have a different opinion. In 1952 after a one-month courtship the two tied the knot and it has stayed tied for 64 years.

Edith Courtney was teaching school at Bunker Hill and boarding with Sheriff J. B. Polk and Bob Baughman of Marion County was stationed at Keesler Air Force Base when his friend, who was married to a friend of Edith’s, set them up on a blind date in December of 1951. The couple was married February 1st of 1952.

“My mother always told me that when you see something you think is what you want, you need to go ahead and get it,” states Baughman. “That’s one time I took her advice.”

“We’ve had a good marriage and never really had any serious problems,” states Edith and gives her husband a playful jab when he states, “yeah, the longer you stay the worse it gets.”

Much of their marriage was spent with Edith following him around the country in his military duties moving as the job required staying in Long Beach for only 4 months after they were married and going to Wichita Falls where Baughman was schooled. He was transferred to San Angelo, TX and it was there Debra was born. Baughman was a B52 Crew Chief and Flight Engineer and when they were moved to Ft. Worth he trained student pilots and was Crew Chief on the CKC 135 jet tanker refueling the B52 in the air. Their son David was born while stationed there and Edith says, “We have two Texans in the family.”

In 1960 Baughman states his outfit moved to Turner AFB in Albany, GA and then he transferred to Columbus, MS.

“The only time we were away from each other an extended period of time was when Bob went overseas to France and England,” stated Edith. “While he was away I oversaw the building of our house in Bassfield.”

When Baughman retired he came home to a new house and a new career. He attended school at PRC and graduated from USM in 1971. He taught Industrial Arts and was Assistant Principal at PHS and Petal High School before he went into bank management spending 27 years working in Bassfield, Tylertown and Sumrall before retiring while Edith remained teaching school until retiring from East Marion in 1991.

“We didn’t know each other very well when we married after only a month but we took time to get to know one another and we have been happy with our lives in general,” states Edith, and her husband advises, “I felt it was cheaper and more productive to spend money on fishing and hunting gear and spend time with my son than it would have been having to spend money and time getting him out of trouble and it worked. We spent a lot of time together with our kids and even riding back and forth to school you’d be surprised how much talk you can get in.”

Edith now 86 is a little older than her 85-year-old husband and says she has always been kidded about being the “older woman.” She states her favorite things about her husband are that he has been a really good family man, a loving father and good provider. Baughman appreciates Edith’s honesty and truthfulness and letting him “know how it is” stating he could always depend on her. Both agree a lifetime commitment mentality is important for couples and getting good counsel from a pastor and wife before marriage is beneficial.

Health problems have plagued the couple in the last several years and have kept them closer to home. Baughman has had heart surgery and, more recently, gallbladder surgery and Edith has had numerous broken bones as a result of osteoporosis but state some of their best memories are of family vacations with the children and their families.

The couple states that they are looking forward to the next big event in their lives– becoming great-grandparents.

Shooting at the Western Motel leaves one dead, one injured