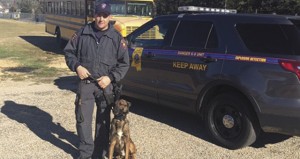 The Prentiss Headlight / A member of the Mississippi Bomb Search Team assisted by a K-9 making their way into BHS Tuesday.

Bassfield High School received a bomb threat last Tuesday morning, along with several other schools across the state.

According to authorities, a call came into the Bassfield High office around 11:15 a.m. The caller stated that there was a bomb on site and it would detonate in 30 minutes.

An announcement was made over the intercom system stating there had been a threat and it was not a drill.

“In a very short time span, JDC law enforcement and the Bassfield Fire Department were on site and we cannot thank them enough, said Jason McLeod, Director of Academic Success.

Students were immediately sent to the football field and eventually escorted across Highway 42 to the Family Dollar parking lot.

Teachers reported the students were expedient and respectful throughout the whole process.

A member of the Mississippi Bomb Search Team arrived with an explosive detector K-9 to thoroughly search the premises. Bassfield was the only school that was searched by a K-9 Tuesday.

At approximately 12:45 p.m., buses arrived from Prentiss and all students were relocated to the Carver Elementary gymnasium.

Students that missed lunch were given a meal at this time.

Once all children were securely and safely at Carver, parents were notified of the circumstances.

“As the students made their way out of Bassfield High, teachers organized them in sections by grade. This made the whole process extremely efficient, especially the bus travel,” said McLeod.

All other Jefferson Davis County school campuses were put on lock down, as was Prentiss Christian School, as a precautionary measure.

After a safety walk was performed, all campuses were cleared and classes resumed their regular schedule.

There have been no reports that any explosive devices were found.

The FBI issued the following statement regarding the situation:

“The FBI is aware of the suspicious calls to several school systems throughout the state.  We have contacted the affected jurisdictions and offered any assistance they might need to help them as they look into the situation. The cases are still local matters at this time,” FBI Special Agent Jason Pack said.

Run for the Roses planning underway

Holley Cochran / The Prentiss Headlight—The 2016 Run for the Roses committee is hard at work planning for the upcoming... read more