The monthly meeting of the GFWC-MFWC Twentieth Century Club of Prentiss was held on Tuesday, February 16 at the 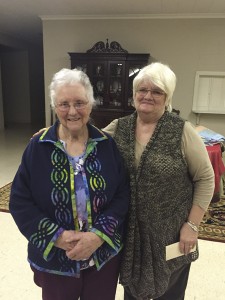 Prentiss United Methodist Church Fellowship Hall.  After the meeting was called to order and the members and guests were welcomed club member Amy Berry gave an interesting devotion.

She had retrieved her material from girlfriendsingod.com and it was titled “Devine Interruptions”  based on Matthew 19: 13-14.  The theme was “intrusive sandpaper people”.  As Amy acknowledged we all know these people as the ones who get under our skin but in reality our interactions with such abrasive people are simply a window of opportunity sent by God.   She went on to say we should see these sandpaper people as God sees them.

Jimmie Layne Brinson followed the devotion part of the evening by introducing Louise Hamil as the guest speaker. Since February is the month of love and caring there could not have been a more appropriate choice.  Louise is a member of the “Threads of Memories” Quilting Club.  She brought with her Pat Myers, the head of the club.  The members in the club make quilts by hand for charities, fundraisers, schools and also cancer patients, true acts of love.  The ladies brought several examples displaying their handy work and told heart warming stories about some of the lives they have touched.

After the entertainment the hostesses for the evening, Missy Jones, Deborah Dickens and Sharon Dungan took over.  They had decorated the tables in with vibrant red table cloths for the month of February.  Additional frills on the tables were valentine doilies, vases donned with heart hankies and heart candy toppers plus all sorts of valentine hard candies.  The refreshments consisted of a delicious spicy taco soup accompanied with pimento cheese sandwiches and cookies.
In the business segment of the meeting the ladies were informed Prentiss would host the 2016 District 5 Convention.

The door prize was provided by Sharon Dungan and won by Jerri Landry.

After the Collect was recited the meeting was adjourned.