In the presence of family and friends, Chelsea Renea Lee and Jason Philip Colip were united in marriage on Saturday, July 25, 2015, at Hardy Street Baptist Church in Hattiesburg at six o’clock in the evening.

The ceremony was officiated by Reverend Johnny Liddell Martin. 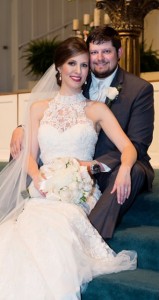 Presented by her parents and escorted by her father, the bride wore an elegant gown of ivory lace appliqué and English net. The high neckline featured sheer lace and scalloped edging that continued to the back.

Accentuating the waist was a hand-beaded collection of silver beads and Swarovski crystals.

The Cathedral length veil was adorned by matching beads and Swarovski crystals.

The attendants wore spa-colored gowns that featured a sleeveless, pleated bodice with V-neckline and swooping cowl back detail.

Following the ceremony, the bride’s parents hosted a reception at Southern Oaks House and Gardens. After enjoying a catered buffet and an evening of dancing, family and friends bid the newlyweds farewell under a dazzling arch of sparklers.

After a weeklong honeymoon to Walt Disney World, the couple is at home in Hattiesburg.