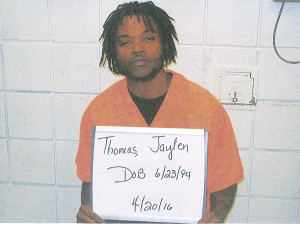 The Prentiss Headlight—Jaylen Thomas has been arrested and charged in the murder of Damos Daniels.

A second suspect has been charged in the shooting death of Damos Daniels, and the critical injury of his wife Megan Daniels.
After further investigation, the Jefferson Davis County Sheriff’s Department along with the Mississippi Highway Patrol, Mississippi Bureau of Investigation, U.S. Marshalls, DEA, and the Mississippi Bureau of Narcotics, initiated a search warrant for two residences on Black Polk Road last week.
A large quantity of marijuana, $9000 cash and a stolen firearm were recovered from the residences.
According to authorities, Jaylen Thomas turned himself in later that day. He was charged with murder and attempted murder.
The shooting occurred in the gravel lot of an abandoned oil well on North Williamsburg Road.
Damos was pronounced dead at the scene, and his wife was taken to Forrest General Hospital in Hattiesburg.
Their two children were also in the car, but were unharmed.
The investigation is ongoing.