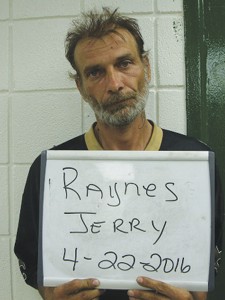 Jerry Raynes, 45, escaped from the Jeff Davis County jail sometime during the early morning hours Monday, according to department officials.

“The inmate got out through a light fixture in the ceiling sometime between midnight and 7:30 a.m. and was last seen wearing a prison orange jumpsuit,” said Jeff Davis County Sheriff Ron Strickland.

“Raynes is a non-violent offender, but we still wanted the public to be aware of the situation,” he added.

Raynes has a previous list of charges that include attempted grand larceny, utility theft, petit larceny, possession of drug paraphernalia and a hold from the Mississippi Department of Corrections, according to Strickland.