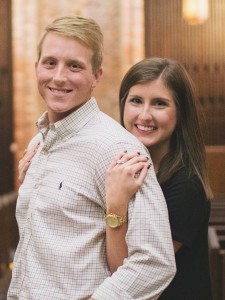 The bride-elect is the granddaughter of Gwendolyn Smith Burdette and the late Thomas Lee Burdette of Columbia and the late Itasca Holland Dilworth of Huntsville, Ala. and the late James Albert Gray, Sr. of Sheffield, Ala. She is a graduate of Columbia High School and Mississippi State University where she earned her Bachelor of Science in Elementary Education. She is employed with the Brookhaven School District.

The prospective groom is the grandson of Totsy Fuller James and the late Joseph Franklin Fuller of Starkville and Mr. and Mrs. Herman Leslie Dungan, Jr. of Prentiss. He is a graduate of Columbia High School. He earned his Bachelor of Science in Civil Engineering from Mississippi State University. He is employed by Dungan Engineering in Brookhaven.

The couple will exchange vows at 6:30 p.m. on Saturday, June 11, 2016, at First Baptist Church in Columbia. A reception will follow at the home of the groom. Family and friends are invited to attend.