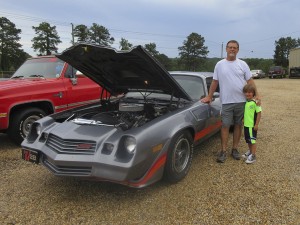 The Prentiss Headlight—Alderman Randy Stamps and grandson Corbin at the car show during the second annual extravaganza. Stamps placed second in the car show’s classic category.

People from counties across the state traveled great distances to participate in the car show and other events.

“I appreciate everyone’s kindness and generosity,” said Chief Joe Bullock, “We had a great turn out this year.”

The chief conveyed that this year the Prentiss Police Department raised over $3,000.

Most of these funds came from the raffle, live and silent auctions.

“I would like to thank everyone who donated to our auction.”  I would also like to thank the Mayor and Board of Aldermen for their continuous support. This would have never been possible without everyone’s help,” Bullock added.

The crowd was entertained by local singing talent Tanner Stuart. Stuart is the son of Anthony and Holli Stuart of Carson.

Along with car and motorcycle shows, Douglas Farms also hosted a dog show.

Kristen Bullock, extravaganza committee member and member of Douglas Farm’s Show Club stated, “I was thrilled that Billy Douglas and the rest of our show club family was part of this year’s event. Both children and adults had a great time. We hope to include them again next year.”

As always, the event will be held on the first Saturday in June 2017. 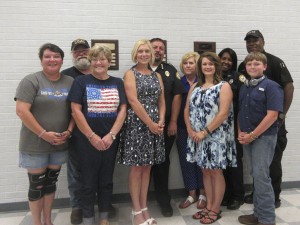