McLeod promoted in US Navy 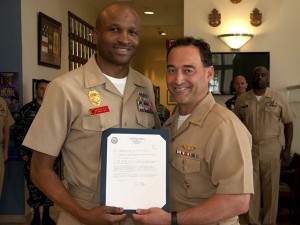 The Prentiss Headlight—Senior Chief Master-at-Arms Orlando McLeod (left)was pinned to his current rank during a ceremony June 6, in Rota, Spain.

Orlando McLeod has been promoted to the rank of Senior Chief Petty Officer with the United States Navy.

Senior Chief McLeod graduated from Bassfield High School in 1995 and is a native of Bassfield, Mississippi. He joined the Navy and attended Recruit Training Command at Chicago, Illinois in July 1995.

Upon completion of his first tour, he was assigned to Seal Team Eight in Little Creek, VA (1998-2001), and then transferred to Joint Forces Intelligence Command Norfolk, VA (2001-2003).

His next, and most recent, assignment was Recruit Training Command, Great Lakes, IL, where he served as a Recruit Division Commander (2011-2014). He arrived onboard Naval Station Rota, Spain in November of 2014.

He obtained a Bachelor’s Degree from Fort Hayes State University in 2011.

He is the son of the late Annie Pearl Graves McLeod of Bassfield.

He is married to Nedra Price McLeod and they have two children, Olivia and Noah.