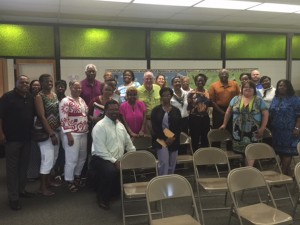 The Prentiss Headlight—A group of community leaders met with JDC School Superintendent Will Russell to discuss the realignment for Jefferson Davis County Schools in 2017.

The Jefferson Davis County School District has a realignment plan in place that will soon become a reality.

Due to a decline in the number of students, the district is not able to maintain both schools efficiently.

Ten years ago, the district educated 2500 students. Presently, there are 1500.

The realignment will take place in the 2017-2018 school year, which will allow a full year to work out the details and logistics.

In a meeting with community leaders Tuesday, Superintendent Russell provided the an outline of the plan.

Each elementary/middle school (K-8 grades) will remain in their town.

“We have a Title 9 issue because we don’t have a girls softball field at Prentiss High. We are not in compliance with the state at the moment, but the State Dept. has agreed that our plan of action will suffice. That, along with better facilities for athletics and newer bleachers, made the decision for the high school to be in Bassfield,” said Superintendent Russell.

Both K-8 schools will keep their name.

A new name for the high school will be chosen, along with new colors and a new mascot.

“We want the students to have input on these decisions. They will have a voice,” said Russell.

According to statistics provided by school officials, the change will net a 40% savings or an estimated 1 million dollars annually.

The school district plans on placing funds in a capital improvement account each year until a new modernized central school can be built.

“We don’t want to place a burden on the taxpayers of this county or the business owners. This is a temporary plan so we can save funds for several years which won’t put such a strain on our citizens,” said Russell.

“When it comes to doing what’s right, I stand on doing what’s right. I’m not in this business to increase taxes just because we have the flexibility to do that. This is a ministry for me, not just a job,” Russell added.

The new school building will be built in Carson in approximately three years.

After the new building is constructed, neither elementary school will be utilized. At that time, Carver Elementary will move to the current Bassfield High campus.

School uniforms will not change, nor will bus routes. If you are brought to the Prentiss High campus now, you will still do so. Then a separate bus will take you to Bassfield, just as it does when students are bused to the Vo-Tech.

“If we don’t go ahead with our plan, the State will come in and do it for us. Then we have lost our control,” said Russell.

A member of the audience asked, “If we wait until the state forces us to realign, would we save more money that way?”

“We are having to dip into our reserve now to maintain. The problem is, can make it if we continue to wait,” answered Russell. “This is a sense of urgency.”

It was noted in the meeting that years ago, there was a study on each school district in the state. It was suggested then to place the Jefferson Davis County students in the Lawrence County district.

“We do not want that to happen, said Russell. We need to take care of this now, so we have a voice for our future.”

The count for extracurricular classification takes place every other year. The MHSAA will be made aware of the school district’s intentions. With an estimated 467 students, the new high school will be a large 3-A or small 4-A.

John Daley, Vo-Tech Principal made a statement regarding the students being placed together. “I want to address the issue of the students themselves. They have cell phones. They are already friends. It’s not like it was years ago with the feuding of the schools. We’ve got to let pride go and do what’s best for our kids,” said Daley.

Prentiss Mayor Charley Dumas stated his concerns about the location of the new school building. “First of all, I appreciate how you have handled this and included us in this discussion. My concern is that Carson does not have the amenities that exist in Bassfield or Prentiss. I would like for ya’ll to consider building the school in one of those locations. Doesn’t matter which one. Just please consider it,” said Dumas.

Supervisor Michael Evans addressed the crowd, “The school district can consolidate without anyone’s input. It is the law. Whatever it takes for me to see education instead of incarceration. We need to figure out how people feel and lets bring it together like grown people.”

According to Russell, the determination of a bond issue on a future election ballot will be discussed at a later date.

The school board voted to unanimously proceed with the realignment effective August 2017.