The Prentiss High School Class of 1976 celebrated its 40th year class reunion June 10th-12th. The activities kicked off with the “Get Reacquainted Night” on Friday night at the fabulous home of Laura Jefferson in the Progress community. The night was filled with a lot of smiles, laughter, hugs, good eating, and serious discussions as classmates reminisced about the years they roamed the halls of Prentiss High School.

On Saturday, the class held a picnic at Jefferson Davis County Lake, with classmates as well as spouses and other family members attending. As the soulful  music played, classmates interacted with each other and got to know family members of classmates better. “Class chef”, Braxton Collins, made sure nobody left hungry as he provided hardy grilled meats for all.

On Saturday night, the banquet was held at Williams’ Good Ole Days Restaurant. The “dapper” clad classmates and spouses came prepared to be entertained, informed, and inspired, and even complimented as they dined and listened to program participants, mostly notably guest speakers, former teachers, Bertile Price and Charles Hatten.

Both recalled the way they remember some of the class members and how they are impressed with how they developed into fruitful adults.

The class thanked the speakers by presenting them with beautiful certificates.

Another highlight of the program was the presentation of a collage by class member, Dr. Joann White, which captured classmates in memorable past and present moments and brought special recognition of the deceased class members.

The events culminated with the attendance of church service on Sunday the 12th at Springhill M.B. Church in Ellisville, Ms, led by class member, Rev. Leander Bridges. After preaching a soul stirring sermon, Rev. Bridges recognized the class. The class members and spouses dined in the church dining facility after the sermon.

The Class of 1976 members’ theme for impression of the reunion was one of thankfulness, thankful for all that played a part in planning and orchestration of the activities and most of all thankful that GOD blessed all 27 of them to be able to participate in the activities. 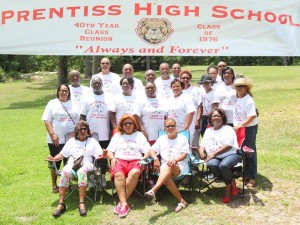