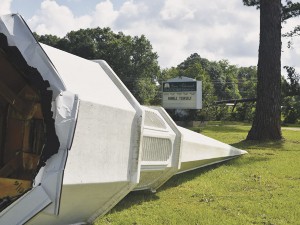 NWS reports a “brief, weak tornado” made landfall on Highway 84 and moved north causing tree and roof damage. Significant damage was done to the Lucas Tabernacle Church of Christ just outside of Prentiss.

The storm caused the steeple to detach from the roof of the building.

There was also remarkable damage to the roof of the Lucas Developmental Center adjacent to the church.

Two homes in the area sustained damage as well as one mobile home.

The tornado traveled at least three-fourths of a mile.

The width of the tornado was 200 yards wide and had winds of up to 90 miles per hour.

Several trees were down on Park Road, Columbia Avenue and John Street causing residents to be without power for several hours.

The home of Earnie and Debra Langley, as well as their vehicle, was heavily damaged by a tree during the storm. 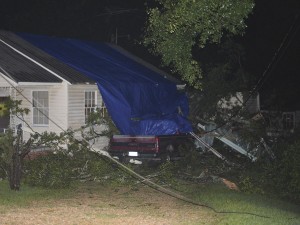 Holley Cochran / The Prentiss Headlight—The home of Earnie and Debra Langley on John Street was heavily damaged in a Monday afternoon thunderstorm that left many JDC residents without power for several hours.

Holley Cochran / The Prentiss Headlight—Sy Garner enjoys a piece of watermelon Monday at the Fourth of July celebration at... read more