JDC Farmer and Logger of the Year

This is part of a partnership with his three children under an LLC arrangement, which will make the operation easier to pass on to the next generation.

The land has been in his family for three generations starting with his grandfather, passing to his mother and now to him and going from timber to cotton to cattle, corn and soybeans and now back to trees.

In the last five years Moeller has repaired and upgraded a low-water crossing on the property in the SW corner of the county in preparation for additional thinning operations in that area, and so hunters can have access to that area.

He has clear-cut an area of mature timber and has, in cooperation with his consulting forester and our county forester, conducted site prep and replanted that area.

Moeller has also let a contract to thin part of one of the plantations and is looking at the probability of thinning the lower plantation.

In addition to tree farming, Moeller has the land leased to a hunt club and there is a gas and oil lease on the property.

He states he intends to continue to be a good steward of the land using the Mississippi Best Management Practices as his guide and his Consulting Foresters’ advice to make the best use of his land.

Jason Boone is the  owner of Boone Timber Harvesting, LLC.

Boone came from a family of loggers. His grandfather and two of his uncles were loggers and so he started out as a young man working in the woods with them. In December 3012, a couple of years after completing college, Boone decided to get back into logging by starting his own logging business.

Boone specializes in thinning and cuts exclusively for Charles Donald Pulpwood, under the supervision of Monty Sanders. “He takes pride in the quality of his work,” stated Forestry Association VP James Fagan, “so he is someone we can recommend to anyone needing timber thinned.”

It was formed in 1922 as a general farm nonprofit organization and in the 1940s Farm Bureau Insurance Company was born to provide a valuable service to members and continues to do that today.

As an example, McCormick states six years ago members of Farm Bureau worked tirelessly and got a referendum that passed to limit Imminent Domain to where private property could not be taken for private use.

McCormick says when he goes to Washington D.C. he is welcomed by our legislators who always want to know what is going on in the 82 offices in our countryside and “ I am happy to carry your message to Washington.” He also states he spends as much time trying to get bad bills killed as he does getting good ones passed.

McCormick predicts with the legislature looking for ways to generate more revenue he looks for there to be a battle to preserve agricultural exemptions in the near future.

“There are very few legislators now who have ties to agriculture and understand the needs of the farmer.” 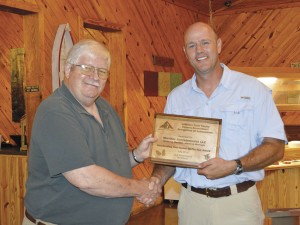 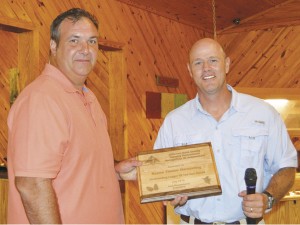 Thomas Brewer was the recipient of the first annual President’s Award given by the Jefferson Davis County Forestry Association for... read more