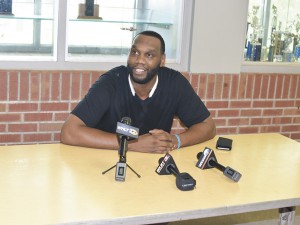 This year’s camp was split into four sessions with 1st through 7th graders going Wednesday, high school girls going Thursday, and high school boys going Friday. Kids from all over the area and as far as Jackson attended the camp.

Since Big Al started the camp in 2009, over 3000 kids have come through his camps free of charge. This camp is strategically placed in the year so each participant will receive school supplies right before the start of school. Along with the supplies, participants also received a basketball, t-shirt, and snacks throughout the session.

The camp is run by the National Basketball Academy out of Ohio. 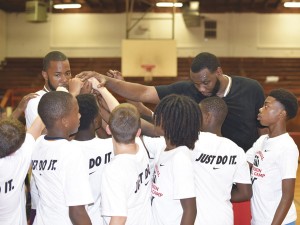 When asked how he felt coming home to his high school gym he replied, “Oh it’s very special, it never gets old to me. Every year around this time the buzz starts going about my camp, and the kids are so excited and every year I get more kids.”

“I think it is very important on so many levels for these kids to see that I came from the same place they come from and if you have a goal you can reach it. I am a living example of that. Their dreams can come true no matter where they are from or how they grew up. If they put God first the sky is the limit.”

Big Al made a huge announcement about future plans in Prentiss.

“I’m just really looking forward to building my own gym in Prentiss so I’m able to do more stuff with the kids year-round. I can start an after school program for kids, so when they leave school, they can come and do their homework and they can play basketball. I’m going to try to build a half football field in there too with trainers. I would also like to include a daycare in the building so parents trying to finish school could have some help. Any opportunity I can give so that the youth will succeed.”

“When I was growing up, every day after school we went to the park to play ball. We didn’t have cell phones and ipads and social media like kids today. I want to make sure the kids have somewhere to go like I did. Somewhere to get help with academics, have a snack, and have fun. I would even like to have a class for people that didn’t finish high school, to help them get a GED.”

“Right now there is no guarantee where the gym will be in Prentiss, but I have options. That is something I hope me and my team can work out in the next six months.”

Jefferson had plans to meet with a contractor on Friday, with hopes of breaking dirt on the building process by this same time next year.

“I looked at it like these are my people. Every one of the kids that come through my camp, I know their folks. I know their mother, their father, their uncle, and to me that’s just my way of giving back.”

“Every time I leave here, I feel great. I feel like okay, I accomplished something. And I’m ready to do it again the next year.”

“I remember every thing someone did for me growing up. I want to help them believe in themselves. And I can honestly sit here and say that I have done that. I did right by my career.”

Jefferson is fresh off signing a free agent deal with the Indiana Pacers in early July. This will be Jefferson’s 13th year in the league.

When asked about the Pacers, Jefferson stated, “It was a well put together team, and I feel like what they’re trying to do, adding me with it, I think it can be a great chance for me to get closer to my goal of winning an NBA championship. For Larry Bird to want to sign a guy like me is also an honor.”

According to Mitch Williams, FCA Southeast Mississippi Director and camp coordinator, Jefferson is the only athlete in Mississippi, possibly in America, that signed a professional contract under Michael Jordan and Larry Bird. 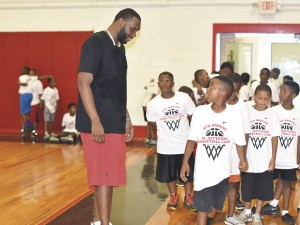 Holley Cochran / The Prentiss Headlight—According to data released this month by the Mississippi Department of Education, the Jefferson Davis... read more