Gone, but not forgotten

In the 1960s Emmett Smith was a butcher for the Jitney Jungle, located where Ramey’s is now, when operator of the Red & White Grocery Hulon Parker asked Smith to put in a meat market in his store.

It was Smith’s first market ownership and it proved to be a profitable move for his family. Local patrons paid for their meat purchases in the meat market and their groceries up front.

In 1963 Smith bought the Bush’s Café building and converted it into Emmett Smith’s Market which ended up supporting three generations of his family. 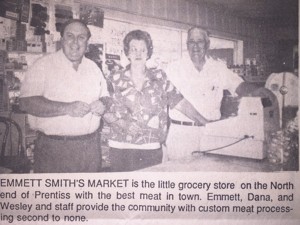 The Prentiss Headlight—A familiar sight for those of you that visited Emmett’s in the 80s. Pictured are Wesley Daughdrill and Dana and Emmett Smith in a Headlight edition dated September 28, 1988.

“Dad and Mom worked all night moving things into the building and opened for business the next morning,” stated Diane Smith Daughdrill.

It was my mother’s first job outside of the home and she really enjoyed it.

They had a full slaughter house and processed meat for people as well as the retail meat sales.

At first they were going to have just a few grocery staples but that soon grew into a full grocery line as well.”

Daughdrill states her oldest brother Emmett Jr. was already in college and Dickie worked at Henry Smith’s Grocery in Whitesand but helped out when he could.

Her youngest brother Donnie wrapped meat and made deliveries after school.

When the slaughterhouse business grew to full time Smith turned the management of the store over to his wife and son-in-law Wesley Daughdrill.

When Emmett and Dana Smith retired in 1990 Diane’s husband who had been a part of the business for 24 years kept the tradition of quality product and personal hometown service alive and later their son Wade purchased the business.

“We supplied meat to cafes, hospitals and schools and smaller grocery stores,” remembers Diane Daughdrill. “We had a good wholesale and processing business as well.

We delivered groceries to neighbors especially the elderly and sick in the community and Wade added the pre-cooked line of meats.”

The store stayed open late many times to 9 p.m. accommodating those who stopped to shop after work but Daughdrill states they never opened on Sundays.

Some of the butchers included Clarence Hall, Charles Blackburn, Harold Easterling and others throughout the years.

Teenage boys from the community worked as bag boys and Daughdrill states their sons Wes and Wade also worked there while growing up.

The business survived through natural calamities in the county that included Hurricane Camille and Hurricane Katrina losing its sign to the latter.

As well as supporting three generations of the family Emmett’s Smith’s Market not only helped the local economy but provided jobs for many who in turn were able to educate their children providing JDC and other areas with teachers, doctors, lawyers, bankers, preachers and other essential professionals.

The decline in small farm cattle production for butchering as well as decline jobs in the county affected Emmett Smith’s Market and other businesses in the county.

The business closed its doors for the last time July 3, 2008 and Wesley Daughdrill retired ending a family era of home town service. 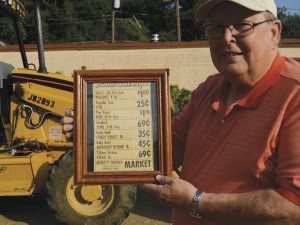 The Prentiss Headlight—Wesley Daughdrill shows a newspaper clipping of Market prices in 1964. 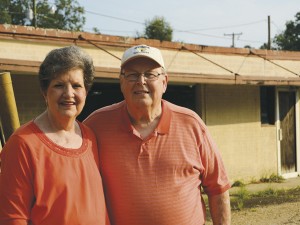 The Prentiss Headlight—Diane and Wesley Daughdrill say farewell to the building that held Emmett Smith’s Market.

Holley Cochran / The Prentiss Headlight—Big Al took a break from camp Wednesday to answer questions for the media and... read more