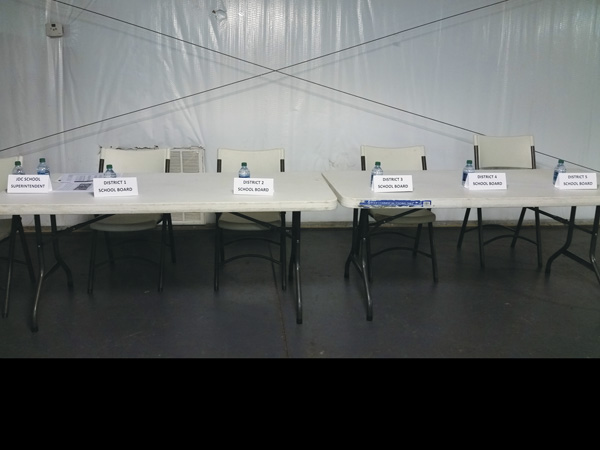 The Prentiss Headlight—The table designated for the school board and superintendent is empty during Monday’s Jefferson Davis County School Preservation Action Group meeting.

Several meetings were held this week regarding the realignment of Jefferson Davis County Schools.

A district 3 meeting was held Thursday at the new academic building.

Roughly 40 citizens were in attendance at the meeting in addition to the five school board members and superintendent.

Concerns voiced by the public at Thursday’s meeting:

•If there is no consolidation, Bassfield will be a high 1-A. Prentiss will still be a 2-a what’s wrong with that?

•How many employees are going to lose their job?

•How much are you paying for the land to build a new school?

•The board is elected to represent the people. The people do not want this. Why were we not consulted?

•What will happen when you don’t pass the bond issue because this is not what the taxpayers want?

•How are you going to improve funding through consolidation?

•Most of your funding from the state comes from daily average attendance. You add up what Prentiss has, you add up what Bassfield has, separately, it is going to be the same if you put them together.

•There is a need for funding, however, the administration continues getting raises.

•How many central office employees will be fired?

•How can five people make a decision for all the county residents without coming to the people of the county?

•Our supervisors are faced with a situation where they have to raise taxes .92 mils for the school  board to  make up a budget deficit, but the central office was given pay raises.

•Not once has anyone anywhere talked about trimming the budget or cutting funds except for teachers.

•The majority of the board of supervisors has expressed serious concerns about buildinga new school and are at this point not in favor based on information gathered.

•Will class size be too large after consolidation?

“First of all, the purpose of these meetings is for us to hear your voice. We as a board are elective representatives of the county.

Now if that means that we can keep all of our employees, absolutely wonderful. If that means we have to lay off 50% of them, then so be it. Now I am not advocating that half of our employees go away, but this is going to be a painful thing. We have no choice but to put our schools together. We cannot continue to operate a school for 1400 kids with the funding we are getting now,” she said.

“The location is not etched in stone, but as far as realignment, that is a done deal. We’ve already agreed on that. Where it is going to be is still on the table, she added.

“I’m going to address a few things, but it is impossible for me to answer everything that has been asked of me tonight,” said Superintendent Will Russell.

“I never said we were broke as a district. What I said was the Bassfield numbers have declined significantly. To relieve your mind we are still looking for teachers. We don’t have every position filled now. We cant afford to lay off teachers. Even if we consolidate we aren’t going to have teachers that are laid off. We are not in the business of getting rid of people.  We are not broke, but we are spending more and more money each year to bridge the gap we aren’t getting from the state. “If we were in financial trouble I would be the first to tell them to cut my pay, but we are not in financial trouble,” he added.

In a second meeting held Monday by a group of concerned citizens, the board nor superintendent was in attendance.

“I invited the superintendent two weeks ago and he was asked to extend the invitation to the board. I also invited two board members personally,” said meeting coordinator Bobby Wilson.

Approximately 100 interested taxpayers from all over the county were in attendance.

The meeting lasted approximately 90 minutes and was non-volatile with no dissension or outbursts.

“We plan to meet with an attorney this week to weigh out all options including an injunction against the school board and superintendent to stop all proceedings of the realignment of the school districts of Jefferson Davis County,” said Wilson.

“The purpose of the injunction is so the residents of JDC can have adequate information to produce an accurate picture of what the future holds. True facts and numbers have not been provided by the school board. Their words and numbers do not match.”

According to Wilson, the savings have not been identified and any possible cuts or layoffs have been disputed between different factions of the school board members and superintendent.

One of the largest problems the citizens voiced is why the school board will not answer the publics questions as evidenced by them not showing up at the this meeting,” he added.

“The Jefferson Davis County School District is financially  stable. The district is proud of its community support of the public schools. The District has committed itself to financial excellence for many years. The district’s system of financial planning, budgeting and internal financial controls is well-regarded. The district plans to continue its sound fiscal management to meet the challenges of the future. The district actively pursues grant funding to supplement the local state and federal revenues.”

“Our group feels there are more questions than answers and therefore going forward with realignment will be  dishonoring the citizens of the county,” said Wilson. “The one thing that our group and the president of the school board agree  upon is that the community needs to come together on this issue.”