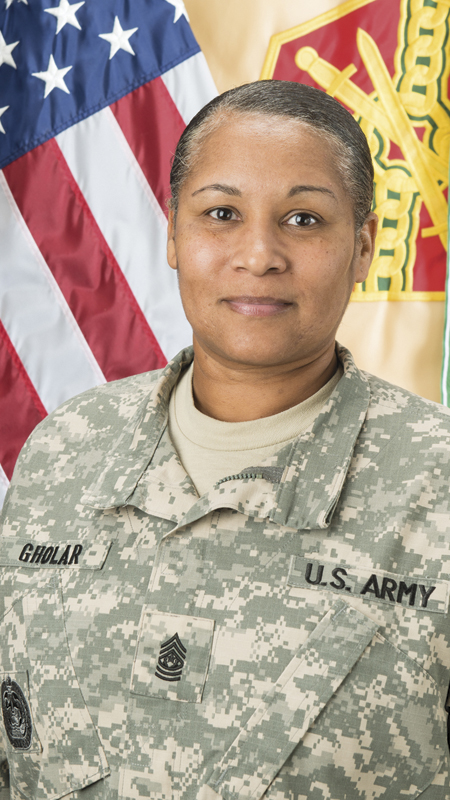 Gholar, who worked tirelessly to make sure the garrison ran like a “well-oiled machine,” is retiring after 31 years of service to the Army.

“I enjoyed my time here; I learned a lot,” said Gholar. “It’s different than any assignment I have had as a sergeant major, which is challenging not having a lot of troops. But with the Soldiers, families and the civilians that are here, it’s been a pleasure to serve them.”

As an advocate for the garrison, Gholar made sure to strive for a stronger team atmosphere within the Natick workforce.

“When you take care of your team and the people who have to do the job that you’re leading, they’re going to accomplish the mission,” said Gholar. “I’ve seen a lot of changes on the installation since my arrival, and it’s all because of teamwork.”

Lt. Col. Ryan Raymond, USAG Natick garrison commander, said the way Gholar approaches everything she does shows how much she truly cares about soldiers.

“The Army, its soldiers and I, personally, have benefited greatly from the tenacity with which Command Sgt. Maj. Gholar approaches her mission of taking care of aoldiers, civilians and families,” said Raymond. “Oftentimes, her passion steamrolled bureaucratic resistance to command priorities and allowed our team to focus on execution.”

“Command Sgt. Maj. Gholar’s engagement with the community truly strengthened our bond,” said Raymond. “Regardless of service, the veterans in our community recognize the significance of the command sergeant major position and respond extremely well to her message.”

Gholar, a native of Prentiss, began her career in May 1986 as a record telecommunications center operator/maintainer. As she rose through the ranks, she became qualified as a senior information systems chief.

Before arriving at Natick in 2015, Gholar’s last assignment was as the operations sergeant major for the United States Army Cyber Protection Brigade at Fort Gordon, Georgia.

“I wouldn’t trade my three decades of service for anything in the world,” said Gholar. “I probably would do a few things different, but for the most part, I treasure every challenge, I treasure every obstacle, and every opportunity they afforded to me to grow; personally and professionally.”

Gholar also added that she has always aimed to be the best command sergeant major, soldier and person that she could be, and since her early days in the military, she’s always been clear about her mission.

“Whether it’s here or whether it’s somewhere else I’m assigned, it’s not just putting soldiers first, it’s (about) putting people first,” said Gholar. “It’s making sure the needs of people around you are met to the best of your ability with the resources you have.”

“I want to be active in my community because I volunteer with the Rotary Club and the different organizations here in Natick,” said Gholar. “One thing that is really near and dear to my heart is the Wounded Warrior Project, so I want to be able to go volunteer and assist that program and get involved in my local town.”