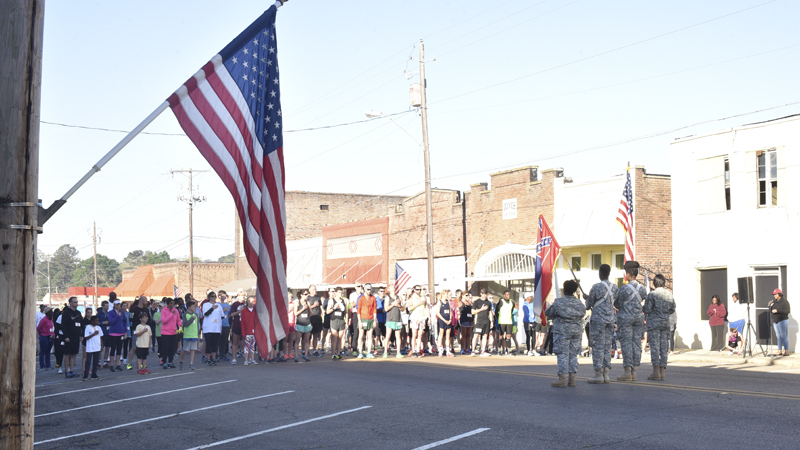 It was a beautiful day for the runners and walkers Saturday morning during the 34th annual Run for the Roses 5K Run/Walk held in downtown Prentiss.

Ryan Crandall of Madison was the first runner to cross the finish line with a time of 18:41.

The first female to cross the finish line was Angel Overstreet of Florence, with a time of 19:21.

The oldest participant was Sylvia Rieger at age 82.

Prentiss Christian School received the award for most registered participants of all the local schools.

The first 5K walker to cross the finish line was Barbara Duplichain of Harrisville with a time of 30:35.  Nestor Anzola was the overall male winner in the walking race with a time of 33:09.

The 5K walk team winner was the ABCDís with a time of 1:43:33 Team members are Steve Pranger, Bill Seabergh, Art Payne, Cindy Ables and Sonja Dufrene.

A 1/4 mile preschool run for children six years of age and younger was the final race of the day.

Rod Simmons won the trip for two to New Orleans given away by WJDR.

There were over 230 total participants in the 5K and one mile races, with another 25 preschoolers participating in the fun run.

At the conclusion of all races, crowds gathered to enjoy the sounds of DJ Brian Turnage and visit the many food and craft vendors in the Longleaf Trace Park.

The Run for the Roses Committee would like to thank all those who participated and helped make the day a success.

Mark your calendar now for the second Saturday in April 2018, for the 35th Annual Run for the Roses.