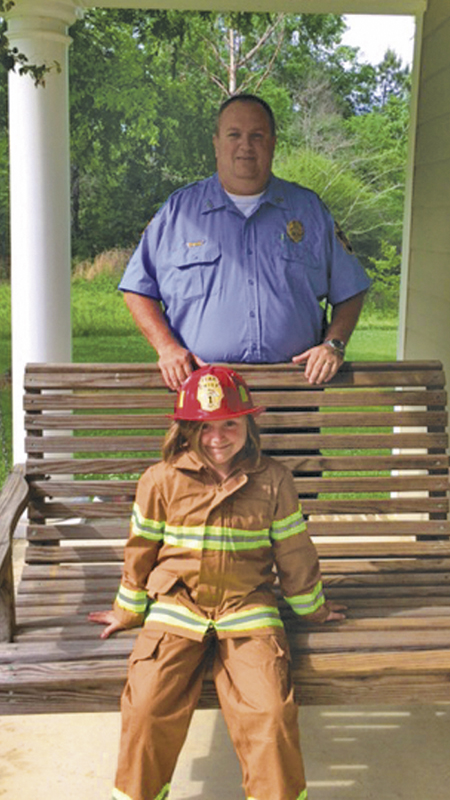 The Prentiss Headlight— Wayne Bass will become the Prentiss Fire Chief after the retirement of Howard Kelly at the end of the month. Bass is shown here with his daughter, Mary Ella, who dreams of becoming a firefighter one day like her father.

Wayne Bass of Prentiss has been appointed by the board of alderman to be the Prentiss Fire Chief effective May 1. Bass will take over after the retirement of Howard Kelly later this month.

“Wayne has been with us a long time and I know you all are aware of his attention to detail,” said Prentiss Mayor Charley Dumas.

Bass has been with the Prentiss Fire Department for 22 years. Chuck Pruitt will fill the position left by Bass in the fire department. Bass was also the chief of the 84 West Volunteer Fire Department. That position will be taken over by Mike Butler.

“I feel very blessed and honored to be fulfilling my career goal here in my hometown of Prentiss,” said Bass. “The decision to take this job was done with much prayer and consideration. I plan to work closely with the volunteer firemen to build the department up. I have many goals and aspirations that I hope to achieve.

My daughter’s dream is to become a firefighter. I want to be a leader that she can be proud of. The motto I live by is from John 15:13, ‘Greater love has no one than this: to lay down one’s life for his friends.’”

A retirement reception in honor of Howard Kelly will be held Thursday, April 20 from 2-4 p.m. at the Ronald W. Jones Memorial Complex.