Buddy Steverson inducted into the Mississippi Rodeo Hall of Fame 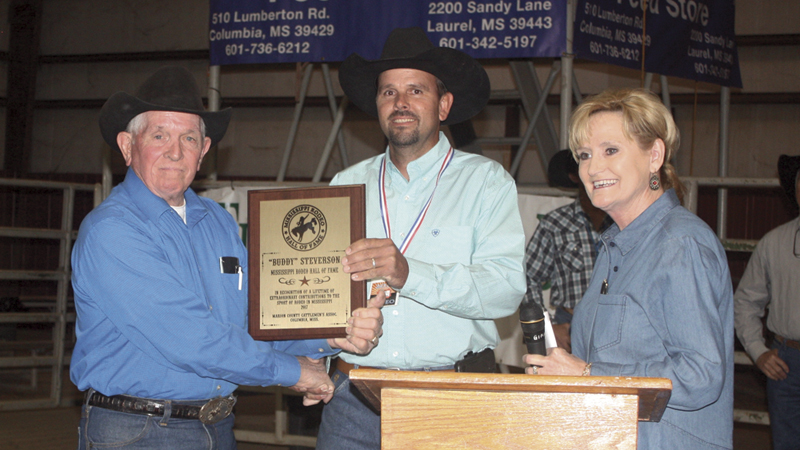 The Prentiss Headlight—Buddy Steverson (left) was inducted into the MS Rodeo Hall of Fame at the Cattlemen's Association Rodeo in Columbia. The award was presented by State Agriculture Commissioner Cindy Hyde-Smith (right) who said he was the first real cowboy she ever new.

Cowboy legend, Buddy Steverson, was inducted into the Mississippi Rodeo Hall of Fame in recognition of a lifetime of extraordinary contributions to the sport of rodeo in Mississippi. MS Commissioner of Agriculture Cindy Hyde-Smith presented the award at the Marion County Cattlemen’s Association Rodeo in Columbia, MS. Smith stated Steverson was the first real cowboy she knew when she was a child.

Steverson moved to this area as a teenager when his father who was in garment manufacturing began his tenure at Edward Hyman Company and eventually began New Hebron Manufacturing Company. His dad did not really care for the rodeo but his mom was a supporter.

As a teenage Steverson began helping J. P. Buckley and Joe Thomas Miller catch wild cattle and once they had them penned he would try to ride them. At the age of 15 Steverson began competing in rodeos in the rough stock events and progressed to calf roping and steer wrestling events. He believed in plenty of practice and it paid off. From 1964 to 1969 Steverson won 21 trophy saddles for Best All-Around Cowboy in various competitions and won more than 100 belt buckles. In 1967 to 1970 he was the All-Around Champion for the Tri-State Rodeo Association and in 2016 he was inducted in the Tri-State Rodeo Hall of Fame. For 16 years it was not unusual for him to make five rodeos a weekend. It is safe to say he definitely loves the sport.

Steverson had a life outside rodeo as well. He graduated in 1957 from Prentiss High and later married Mary Anne Polk of Prentiss. They have three daughters, Angie, Kathy and Kristi. In 1970 he took over operation of the manufacturing plant and gave his rodeo days a rest. The business had begun to expand under his father. After a beginning of only 16 employees it grew to 240 helped by Steverson’s addition of his own line of “Buddy’s Jeans.”

You can’t keep a real cowboy out of the rodeo long. In 1980 Steverson began having two rodeos per year at the family ranch, the Lazy S-5 and he worked diligently to make it the best. It became known as one of south Mississippi’s best rodeos. He brought many big names and well-known entertainers to the area putting New Hebron on the map and into the spotlight. His last rodeo at the Lazy S-5 was in 1989.

Steverson’s accomplishments are as high as they are many in the rodeo world but he says they are not really his own.

“In 1980 God turned me around,” states Steverson, “and let me know that He gave me these accomplishments so I could use them to witness for Him. I turned to the Lord for the rest of my life.”

You would not be a student of Steverson’s without hearing the gospel through Jesus Christ. Riding, roping and all such activities were interspersed with sound biblical life lessons and genuine concern for the spiritual condition of all his prodigies and friends.

Many of his students have gone on to be legends of their own. Steverson has a treasure trove of cards and letters from those he has helped that are filled with words of gratitude for his help in the sport and in life. Those are more treasured by him than all of his own prizes of belt buckles, saddles and awards.

Former award winning students include Dottie Powell of Madison, Ashley Buckley of Prentiss and James Smith of Seminary. Some of his present students include Cash Miller and Evan Coulter of Prentiss, Blaise Holder of Williamsburg and twins John and Michael Holland of Bassfield. Some of these will compete soon in Hattiesburg.

On the cover of a 1980 Mississippi Magazine he was called a Cowboy Legend but that does not even begin to describe the cowboy, the father, the mentor, the friend, the man Buddy Steverson. He has lived through a plane crash, a train crash, a heart attack and two strokes but he continues to help young cowboys and cowgirls, and anyone who will listen, reach for their best to find their place in the rodeo world, life and most important to him, faith in the Lord.

Kelly retires after 36 years of service