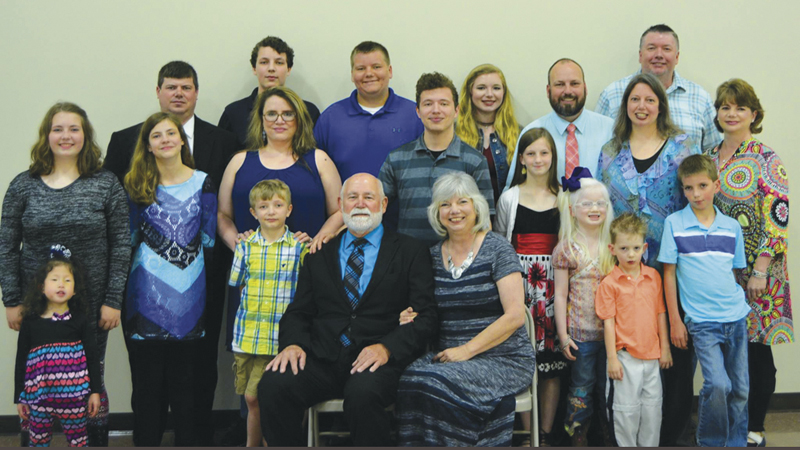 The Prentiss Headlight—Rev. Charles R. Burnham was honored Sunday for his 50-year dedication to the ministry. Pictured with Burnham are his wife, Shirley, and their children and grandchildren.

Whitesand Baptist Church honored their pastor of 14 years, Rev. Charles R. Burnham with a reception to commemorate his 50 years in ministry.

During the Civil War era Burnham’s great-grandfather, Council Burnham was a circuit-riding preacher.

The family story passed down says that he was leading revival services at County Line Baptist Church, Rankin County when he was asked to pray in a church member’s home.

He got on his knees and one of the things he prayed for was that God would call one of his family members into the ministry. Before he rose he had a stroke and never spoke again before he died a few days later.

Charles Burnham was the next family member to surrender into the ministry of preaching the Gospel.

While still in high school, he met Shirley Phillips of Pearl. They dated for a short period before he proposed to her in front of a funeral home and in June of 1969 they were married.

The couple has three children, Robin Douglas of Puckett, Marsha Hays of Raleigh and Rev. Jonathan Burnham of Puckett and they have 12 grandchildren.

Over the course of his ministry Burnham has served the State Baptist Convention Board and county associations in various positions.

He began a jail ministry in Simpson County where there had not been one before. In 1986 he served as the Grand Chaplain for the Masonic Lodge of the State of Mississippi. He helped organize the Pastor’s Alliance in Simpson County that created a forum for pastors of all races and Christian denominations to come together to pray for and encourage one another and work together to win souls to the Lord. He served several years as a hospice chaplain comforting and counseling the dying and their families. He has supported the right to life and encouraged the end of abortion attending the state capitol prayer vigil for the unborn for more than 30 years.

Being a minister has not all been serious business. Burnham states he has eaten many wonderful meals with church members but also had to discreetly cover a worm in his turnips so as not to embarrass the cook. He planted what he was given by a “church friend” as cucumber seeds and grew hanging cantaloupes.

After a funeral he broke the mood of sadness when he fell backwards over a tombstone while talking to an old girlfriend. (His wife states she truly believes the Lord has a sense of humor.)

He had a church member concerned enough about him in the sun while fishing to give him sunblock lotion that turned out to be tan accelerator.

While preaching Burnham states he has had everything from cats and dogs come down the aisle to sticky hand toys fly across the sanctuary. There was a time when the animal incidents happened so often he laughingly said his children’s pets made more decisions for the Lord than his church members did.

He has preached spirit-filled sermons on a regular basis but at times his mispronunciation of scriptural words caused church members to almost fall off the pews with laughter.

At times while visiting church members he has dealt with small dogs nipping at his heels and larger ones trying to take his leg off.

Burnham says he has laughed with his members, cried with them and also bled for them at times donating his own blood.

He has been with saints of God who with joy saw the angels coming for them as they left this world and with those who saw the gates of hell awaiting them. He states he has walked families through the tragedies of life and they have walked with him there too. He has laughed with them, cried with them, married them, seen their children born and buried others. He has agreed and disagreed with them in love and always stood firm in the Word.

Rev. Charles Burnham states his greatest joy has been to see souls saved and the next is to see his children grow up to become strong Christians, marry those who serve the Lord and raise their children to do the same.

He stated his goal is and has been throughout his ministry to be in the will of God whenever and wherever that may be. Now that he has reached this milestone of 50 years in the ministry his hope is to finish well.

Meet the Candidates May 4