Kelly retires after 36 years of service 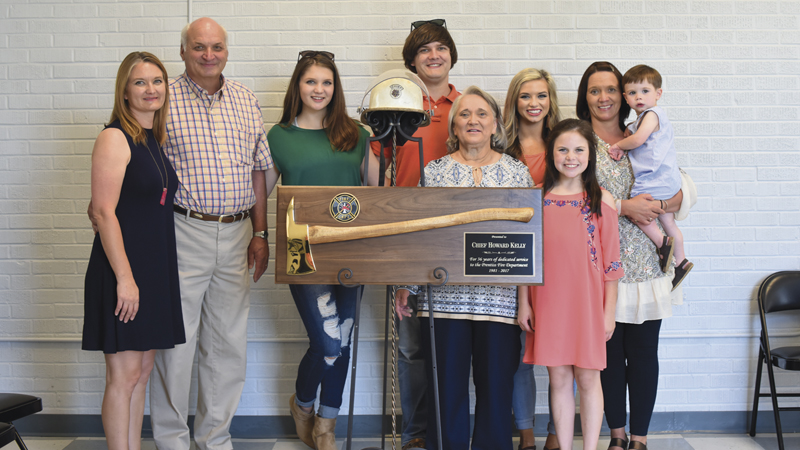 Holley Cochran / The Prentiss Headlight–Former Prentiss Fire Chief Howard Kelly with his wife Brenda, daughters Misty and Amy, and five grandchildren at the reception held in his honor last Thursday.

After 36 years of service, Prentiss Fire Chief Howard Kelly has retired. A reception was held Thursday at the Ronald W. Jones Memorial Complex in his honor.

“To properly place 36 years of service in context, the Town of Prentiss is 113 years old, meaning Howard has been fighting fires and protecting lives and property for nearly a third of the town’s history. Countless hours are spent away from family while serving others. His experience will be missed, but we are happy for Chief Kelly as he begins a new chapter in his life,” said Prentiss Mayor Charley Dumas.

Dumas presented Kelly with a gold ax to commemorate his retirement.

“One of the most memorable things that ever happened to me was just after 911 got set up in the county. I got a call about 1 a.m. that there was a six-year-old baby in Bassfield that was choking. I spent thirty minutes on the phone talking the mother through it. About ten minutes before the ambulance arrived I could hear the baby crying. That was one of the best things I’ve ever done,” said Kelly.

“That was in 2005. To me, that was the best and worst time right there together. Four months later Katrina hit.”

Kelly plans on doing some traveling now that he and his wife, Brenda, are both retired. “I have a 33-foot long travel trailer coming next month. We are planning to take two of our grandchildren to the mountains as soon as possible.”

“I am going to miss it, sure, mainly the people. But I have never been to any of my grandkids awards nights at school, so I am definitely excited about being able to enjoy those family moments.”

Kelly was recognized by the Mississippi Fire Chiefs Association as serving the same department the longest of any other chief in the state.

He also served as vice-president of the southwest district of the Mississippi Fire Chiefs Association for three years.

“I have enjoyed working with the people of Prentiss and being a servant to them. This is, by far, the most satisfying job I’ve ever had.”