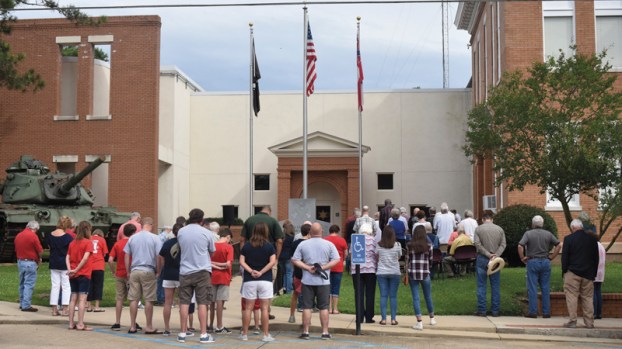 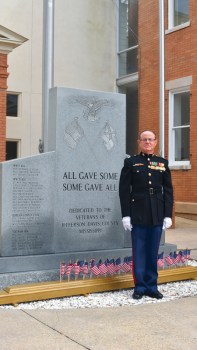 Holley Cochran / The Prentiss Headlight—Guest speaker Capt. Ralph Hanegan stands in front of flags placed in memory of those from Jefferson Davis County lost at war.

Over 75 people turned out Monday morning for the Memorial Day service presented by the Jefferson Davis County Veterans Administration and the Town of Prentiss.

The Pledge of Alliegance was led by Sgt. Joe Bridges, followed by the National Anthem and prayer by Rev. Charles Burnham.

Prentiss Mayor Charley Dumas provided the reading of a Memorial Day poem, followed by his introduction of the speaker, Capt. Ralph Hanegan.

“Ralph is such an integral part of our community. He is very active, not only in Bassfield, but in Prentiss as well. We appreciate the service he does for us, not just his military service,” said Dumas.

Hanegan is a 1966 graduate of Bassfield High School. He enlisted into the Marine Corps in March of 1966 and after finishing boot camp and infantry training, he received orders to serve in the Republic of South Vietnam.

Hanegan received many military awards throughout his career and retired in March 1990 after completing a 24-year career.

After retiring from, the Marines in 1990, Hanegan served as the Director of Human Resources at the Princess Royale Resort in Ocean City, Maryland.

He returned home to Bassfield in 1995. He attended The University of Southern Mississippi, graduating with highest honors and earning a Bachelor of Science Degree in Business Management.