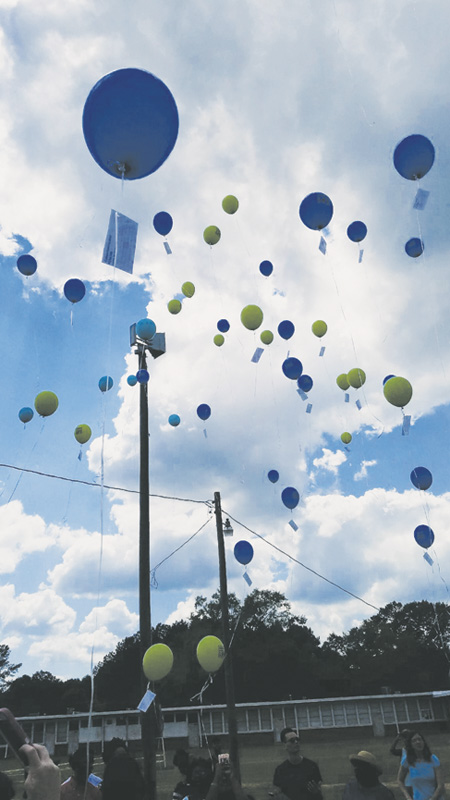 The Prentiss Headlight—Approximately 130 balloons were released Saturday in honor of Zackery Sandifer.

Sandifer was shot by his father, Lee Sandifer, in the early  morning hours of May 31. His father then went on to fire two shots at his mother, Christine Lewis, before taking his own life.

Family and friends remembered Zackery Saturday inside the gymnasium before releasing balloons outside in his honor.

“Zack was an outstanding student who worked hard everyday in the classroom. He was a model student on the bus and at school. It warms my heart to know that he lives on in many others because his family made the heroic decision to donate his organs. Zack will truly be missed by all in the J.E. Johnson community.”

Approximately 130 balloons were released following the short ceremony.  The balloons were donated by Blair E. Batson Children’s Hospital. Many balloons were labeled with “Donate Life” on the side, to honor Zackery and raise awareness of the importance of what it means to be an organ donor.

A message on the balloon strings read,  “Zackery was a 10-year-old boy who became an angel too soon, but was a hero.”

There was also an address printed on the card so those that find the balloons can mail the card back.

“We want to get the cards to Christine so she can see everywhere the balloons traveled,” said JDC Exceptional Education Director and test coordinator Dr. Su’Brina Mason.

Lewis said Zackery needed 10 to 12 units of blood to stay alive long enough to donate his organs.  She hopes people will hear Zack’s story and decide to become donors too.

“If it wasn’t for blood donation, they could not have kept my baby alive for him to be an organ donor. It’s really important for folks to take that 30 or 40 minutes out of your day to donate blood,” said Lewis.