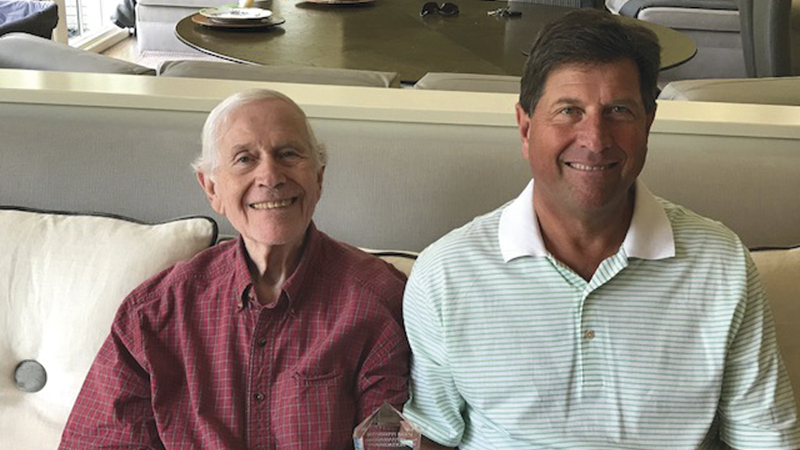 Holley Cochran / The Prentiss Headlight—Stephen P. Kruger was recently elected as a Fellow of the Mississippi Bar Foundation. He is pictured with his father, retired Prentiss Attorney Donald G. Kruger, who is a founding member and signed the charter to incorporate the Foundation in 1962.

Stephen P. Kruger of Jackson was recently elected as a Fellow of the Mississippi Bar Foundation and was inducted into membership at the Foundation’s recent annual meeting and Fellow’s induction ceremony held at the Old Capitol Inn in Jackson.

Stephen is the son of Donald G. Kruger, who is a charter member of the Foundation and was one of the 15 incorporators that signed the corporate charter on Dec. 6, 1962. Stephen is the first son of a founding member to ever be elected as a Fellow.

Donald G. Kruger practiced law in Prentiss for over 45 years. He was the attorney for the Board of Supervisors for 25 years and was the Prentiss City Judge, before his retirement.

Stephen has been practicing law since 1981 and is a founding shareholder of Page, Kruger and Holland Law Firm located in Jackson.

He has chaired the Medical Liability and Healthcare Law Committee of the Mississippi Defense Lawyers Assocaition and authored the section on Professional Malpractice in the Encyclopedia of Mississippi Law.

He is active in the Medical Defense and Health Law Committee of the International Association of Defense Counsel.

He is also a member of the first graduating class of Prentiss Christian School in 1974.