JDC Forestry Association Farmer and Logger of the Year 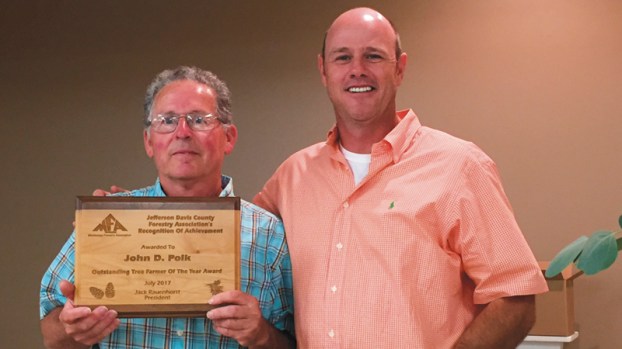 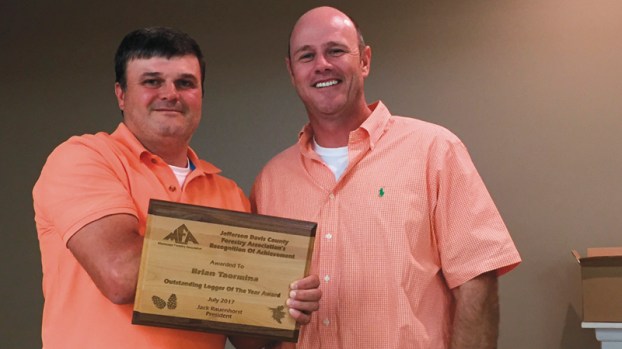 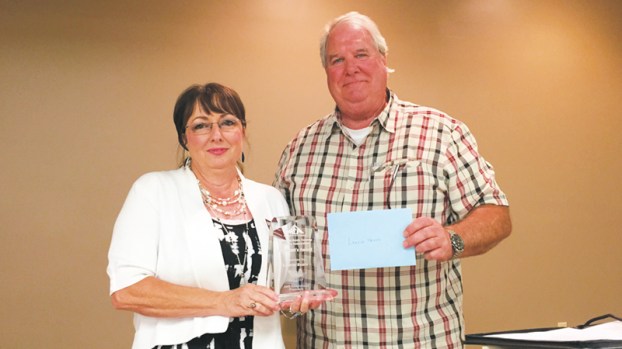 The Prentiss Headlight—JDC Forestry Association President Jack Rauenhorst presents Laurie Sears with the President's Award for her service to the county.

The Jefferson Davis County Forestry Association recognized John D. Polk as Tree Farmer of the Year and Brian Taormina as Logger of the Year.

The annual banquet was held at Bethany Baptist Church on July 17.

James Fagan, vice-president of the organization, presented the awards.

Taormina is one of the youngest loggers in the association. He is a 37 year old from Sanford in Covington County.

His dad was a logger so he has been in logging his whole life. He started out working for his dad and then worked with various other logging companies until 2014 when he decided to start his own company.

He has a crew of four people and they specialize in clearcuts and thinnings. Taormina is the owner and operator of Okatoma Logging.

John D. Polk is a lifelong resident of Jeff Davis County who owns and operates a 35-acre tree farm in the southwest portion of the county.

He started his tree farm in 1983 with the purchase of 11 acres and an old farmhouse. And at every opportunity over the next 25 years he added to that with other timberland purchases.

His tree farm is managed for wildlife, recreation and timber production. To do this, he regularly thins and prescribe burns his pine stands, maintains numerous openings for wildlife and keeps a generous amount of mature hardwood scattered throughout the property.

Also receiving an award at the banquet was Laurie Sears.

She was presented the President’s award by association president Jack Rauenhorst.

Sears is the Jeff Davis County MSU Extension Office administrative assistant. She has received numerous awards for her work and most recently she was named State Administrative Assistant of the Year in 2015.

She serves on her state professional association and has held many leadership positions.

Sears has also been active in the Run for the Roses. She is an integral part of keeping the Jeff Davis County Forestry Association together.

Speakers for the banquet were Marcus K. Measells and Dave Godwin.

Measells is the extension assciate III for the Mississippi State University Department of Forestry. He spoke on forest certification issues.

Godwin gave an activities update. He is the landowner coordinator for the Mississippi Forestry Association.

Also serving as an officer for the JDC Forestry Association is secretary, Thomas Brewer.