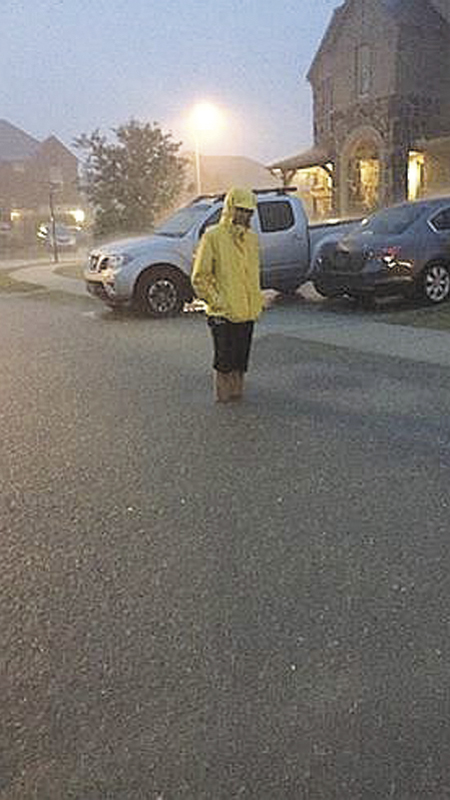 The Prentiss Headlight— Son William checks out the water depth in front of the Bridges’ home.

Born in Prentiss, Bradley Bridges did not live in JDC very long before the family moved to Texarkana and then Dallas where he grew up.

His mom and dad returned after retirement and Bridges came back after graduating college.

He worked at USM for about seven years and Forrest General Hospital for five years. He married Wendy Pouncy, and William and Madelyn were born here before he moved his family to Texas.

Bradley Bridges lives in Richmond, Texas near Sugarland, which is Southwest Houston.

He lives with his wife Wendy, their four children William, Madelyn, Sasha and Diana and their 5-year-old poodle, Copper.

They prepared for Hurricane Harvey, but weren’t afraid to go out to eat at Chili’s for Madelyn’s birthday just before the storm reached their area. “I think we were the only ones in the place at the time,” stated Bridges, “but it had not really gotten bad yet.”

As the storm progressed Bridges said water was close to the brick wall but did not enter their home.

However, the rains were so hard and heavy and so relentless that water did come in on one of the walls.

“I can’t figure out how it got in, just an abundance of wind and rain, I guess.”

“Other than that our house made it fine. One thing that made that possible is we live in a brand new neighborhood built in an old sugarcane field. All the trees are brand new and small and all utilities are underground.”

“I think that was very helpful for maintaining power and water. We have a whole home water filter system and we were comfortable with that but did buy some bottled water in case the power went out.”

An interesting aspect here is that 16-year-old Sasha and 14-year-old Diana were adopted from the Ukraine and have only been in the states for two months, one month was Texas dry and the next month it rained everyday.

Bridges stated communication with the two is mostly by electronic translator but progressively is improving.

He said for most part they accepted it as rainy weather and a lot of it.

They didn’t realize this particular episode is a one in 800-year event.

At a certain point all the kids became stir crazy and when there was just rain and no thunder and lightening they were allowed to play outside in the downpour but Copper not happy about having to go out in the rain to “do his business.”
Bridges stated that a lot of people in neighborhoods have had to fight snakes and turtles coming out of bayous trying to find higher ground. “One lady opened an umbrella she had left outside,” laughs Bridges, “and snake fell out on her. We do have alligators in the neighborhood but they have hung close to holding ponds, etc. none on anyone’s porches yet, turtles and snakes and fish sightings in street, but no alligators.”

“After the worst part was over we found ourselves on an island,” stated Bridges. “Any direction we went—the roads were covered. We had prepared with water and gas, groceries and a generator ready to go but we never lost power for any long periods of time, on and off some, but for the most part we had power.”

Bridges’ neighborhood was not completely isolated from what was happening in other areas of Houston. Their home is close to Sugarland Airport, which was flooded so that only helicopters could take off and land. “We were under their flight pattern. I know I saw all kinds of helicopters, government, army, you name it, come over our house.”

Though the Bridges were spared much damage Harvey played havoc with many people’s lives.
“For 3 years I’ve worked at the University of Texas Health Science Center in downtown Houston in Human Resources as director over the compensation program for all the schools. The organization learned a lot when Hurricane Ike devastated it a few years ago. We were very prepared for Harvey with floodgates, etc. and it paid off. We sustained very little damage weathering the storm very well structurally. There are about 8,000 employees and many are affected in a lot of different ways. My job right now is to be there for those folks. Some lost homes, cars, can’t get to work and are worried about their jobs. I’m trying to reassure them about their jobs and help as best as I can to find places to live as well as give psychological support. Many are now with no access to computers and we are trying to fix them up, letting them fill out FEMA paperwork, etc. at the offices. I have set aside all other job aspects and have been an employee resource center and probably will be for several weeks.”

“We got the rain side,” stated Bridges, “but people on southeast got rain and wind and their houses are leveled. I was in Hattiesburg for Katrina, had trees on our house, out of work and no power for 2 weeks. I know how that feels. That’s what those people here are going through now at Corpus Christi and Houston. There are a lot of hurt people and we hardly know what to do for them. Some just don’t know what to do first. That is what we are trying to do at work, guide them to the right agency with the right questions.

3.Richmond, Tx: The sign to the right is an understatement for sure. This is the intersection of Hwy90A and Hwy 99. Bradley Bridges’ usual route to and from work. Look at how close the water level is to the traffic lights. That is some seriously deep water. (Unknown Photographer)

4. CAT 1 on the Bridges couch. Madelyn named him Harvey.

5. Hurricane insanity has set in. Son William checks out the water depth in front of the Bridges’ home.