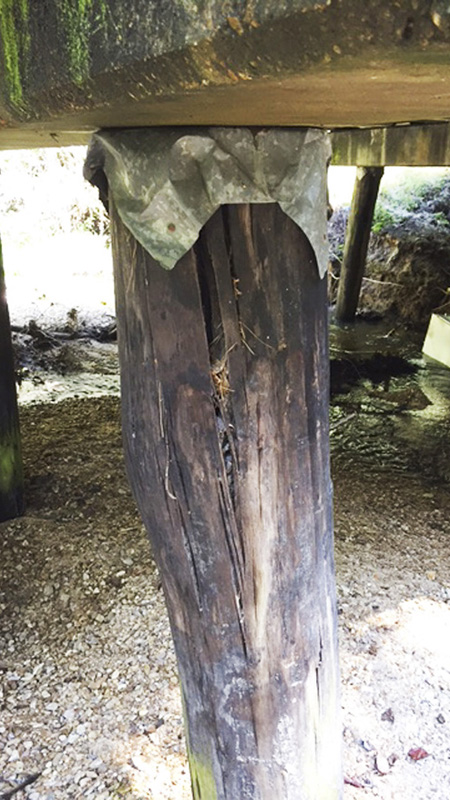 The Prentiss Headlight–A timber piling under the West Saint Stephens bridge in District 1 shows signs of failure. The bridge will remain closed approximately four to six weeks while repairs are being made.

County Engineer Les Dungan met with the board of supervisors Tuesday to update them on the bridge crisis in the county.

“We are being proactive,” said Dungan. “We are trying to stay one step ahead of the state so as to minimize closures.”

The bridge on West Saint Stephens in Distict 1 was closed over the weekend.

The bridge was recently inspected and timber piling had begun to split and mushroom.

“In the last 12 months, two of the pilings have began to fail. The bridge is now closed until further repairs can be made.”

Of the 33 JDC bridges with timber pilings, Dungan presented a list to the board of the bridges most likely to be closed by state inspectors.

District 5 had none emergent, but possibilities are Zion Hill, Golden Pine and Oak Grove roads.

In District 4, the Clem School Road bridge is being watched with the possiblity of state closure. County crews are currently finishing up repairs on the Mount Zion bridge. Sugar Ridge Road also being monitored. “I feel those three bridges are likely to be closed if nothing is done,” said Dungan.

District 3 had one bridge on Sumrall Road needing repair. South Williamsburg has one bad piling, but it is not advanced. Melba and Santee Methodist, are both showing early signs of decay

In District 2, the Bass Burkett bridge over Holiday Creek is being watched and could possibly be closed in the near future. The Joe Dyess Road bridge over Dry Creek is questionable.

As noted, the West Saint Stephens bridge in District 1 is closed until further notice.

That bridge was replaced in the mid-80s when Robert Glynn Rogers was the District 1 Supervisor.

It will be four to six weeks before the bridge will be re-opened.