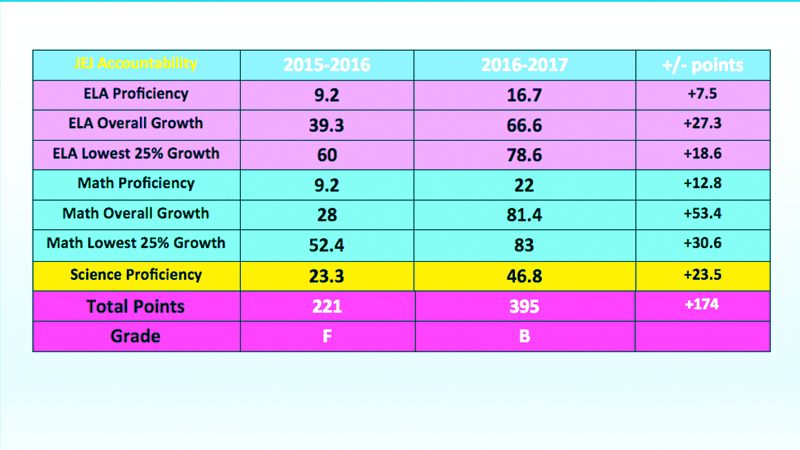 J.E. Johnson Elementary School made an impressable improvement from an F grade to a B under the leadership of Principal Carrie Hammond Walker. Walker is now the assistant principal at the newly formed Jefferson Davis County High.

The 2016-17 accountability grades are based, in part, on how well students perform and progress from year to year on the Mississippi Academic Assessment Program (MAAP) tests for English language arts (ELA) and Mathematics. These tests are aligned to the Mississippi College and Career Ready Standards and are administered annually to students in grades 3-8 and in high school.

Marked improvement was noted in every single category at J.E.Johnson with the highest being in math overall growth, math lowest 25 percent and ELA overall growth. The school improved a total of 174 points bringing its score to a 395 from last year’s score of 221. A detailed chart of J.E.Johnson scores can be seen below.

“I am so proud of all of the J.E. Johnson students and their teachers. Everyone made a tremendous effort to bring this school up to a B rating,” said Walker.

G.W. Carver Elementary dropped from a B to a C, with the main loss in points being in math overall growth and math lowest 25 percent growth.

Bassfield High School improved from an F to a D school, as did Prentiss High School. Bassfield increased its score by 85 points. Prentiss increased by 36.

The Jefferson Davis County School District as a whole raised its grade from a D to a C.

“Are we where we want to be, absolutely  not,” said Superintendent Will Russell.

“But we are absolutely going in the right direction. We are in a good place in the district right now.”

The accountability system also factors in how well students perform on science tests in grades 5 and 8.

Accountability grades for high schools and districts include the four-year graduation rate, student performance on biology, U.S. History and ACT tests, and student participation and performance in advanced coursework such as advanced placement and dual credit/dual enrollment courses.

The accountability system places an emphasis on the progress students make in ELA and mathematics from year to year, particularly the lowest performing 25 percent of students.

The 2016-17 accountability data was used to set a new baseline to determine the thresholds for earning each letter grade.

The Mississippi State Board of Education decided in August to set a new baseling to correct artificially high growth rates included in the 2015-2016 grades.

For the 2016-17 accountability grades, districts and schools have been awarded the highest grade they were able to achieve based on current thresholds or the new baseline for 2017-18. The highest grade is the official grade, though both possible grades have been published for transparency.

“We expect to see continued growth in all of the indicators we measure as teachers continue to challenge and support their students,” Wright said.  “Our students have demonstrated, once again, that there is no limit to what they can achieve.”

Mississippi State Board of Education Chair Rosemary Aultman said accountability grades provide valuable information to parents and communities about how well schools are serving students and preparing them to be successful in college and the workforce.

“I am proud of the hard work that Mississippi teachers and school leaders do each day on behalf of their students,” Aultman said. “Our schools have raised expectations for what students can accomplish, and students are showing they can meet, and exceed, higher expectations.”

To view the complete 2016-17 accountability results for schools and districts visit:http://reports.mde.k12.ms.us/report/report2017.aspx