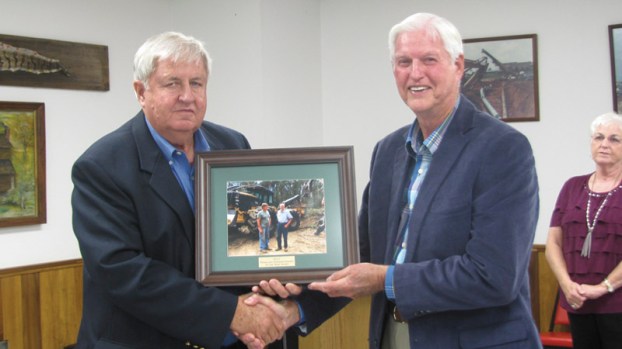 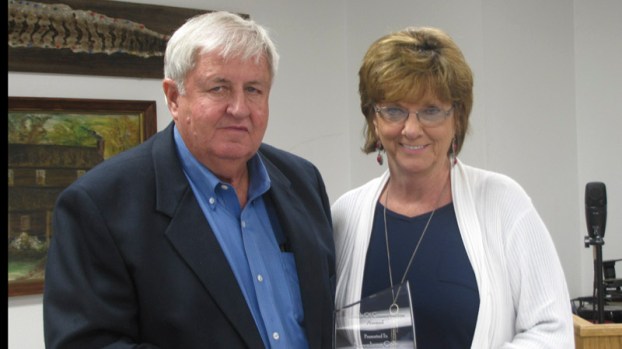 The Prentiss Headlight—The 2017 Friend of Consevation award being presented to Nevelene Cole by commissioner Herman Dungan at the JDC SWCD annual membership meeting and banquet.

JDC Soil and Water Conservation District members gave the 2017 Outstanding Woodland Conservationist award to Jimmy Broughton and the 2017 Friend of Conservation award to Nevelene Cole at its 48th annual membership meeting and banquet held Nov. 14, at the M.G. Dyess Multipurpose building in Bassfield.

Broughton manages 20,000 acres of Forestry in Mississippi and Louisiana. He owns more than 400 acres of land in Marion and Jefferson Davis County that is devoted to forestry and wildlife.

“The thing that I enjoy most about my job is working with people and seeing the land respond to my management efforts,” said Broughton.

He enjoys elk hunting in Colorado and turkey hunting in Mexico. He believes if you cut a tree, you should plant another one back. This is a sign of a true conservationist.

For the past nine years, Cole has been dedicated to helping promote the conservation of our natural resources to more than 700 students in the Jefferson Davis County School system.

She has been instrumental in helping the Jeff Davis County Soil and Water Conservation District with our annual Conservation Field Days and the Progressive Agricultural Safety Day.

Cole was recognized for her commitment in helping Jefferson Davis County SWCD educate our youth on the importance of Conserving our Natural Resources.

Dancin’ Dan the Banjo Man is a husband and wife duo from Simpson County.
Dan plays his ole time banjo and harp while his wife, Frankie, plays the base or Mandolin.
Their music can be described as a mixture of ole time, country, blues and gospel, all with a Bluegrass spin.
The purpose of this annual membership meeting and banquet was to recognize individuals who have contributed to the management of our natural resources and to give thanks to those who have supported this organization throughout the year.

The purpose of the annual membership meeting and banquet is to recognize individuals who have contributed to the management of our natural resources and to give thanks to those who have supported this organization throughout the year.