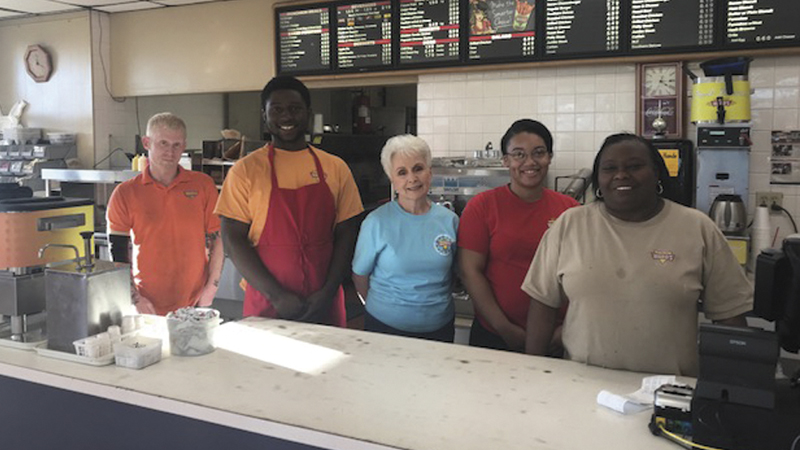 Holley Cochran / The Prentiss Headlight—Shirley Puckett (center) has been managing the Ward’s in Prentiss for 25 years. Ward’s will close its doors Jan. 31 and re-open Feb. 5 as The Deck.

Ward’s on South Columbia Avenue in Prentiss opened its doors on Thursday, April 5, 1984. It opened at 6 a.m. and served Thomas Holloway as the first customer.  It will close the doors on Wednesday, Jan. 31., two months shy of its 34th anniversary.

“Larue Saulters came to me and asked me to be the manager. I told him, ‘I’ll try it for a year.’”

After Puckett received a business degree from PRCC, she worked five years at Midland Shirt Company in Bassfield and 16 years for a government contractor making shirts for the military.

“I also helped my father run Kermit’s Kabin because he had such a hard time trying to keep help. That was around 1989-90.”

Puckett says she will miss her customers the most.

“I will miss the day-to-day contact with the precious customers and all the kids that I have seen grown up from babies, to being married with babies of their own.”

Ward’s was named the 2006 Jefferson Davis County Business of the Year. For three years in that time period Ward’s made over $1 million in sales.

There are several reasons for the closure. The Ward’s landowners would not sell the property and wanted another long-term lease signed with a monthly monetary increase

“We were also at the point of being shut down by the franchise because we would not update the store,” said Puckett.

The things the franchise was asking to be done were going to cost $200,000 or more. They also wanted a new Ward’s built on a new property. “We looked into that, but we were unsuccessful.”

“All of the investors being at the point we are in life, we were not able make that kind of investment.”

There were 19 original investors when Ward’s opened in 1984. At its closing, there will be 10.

Investors met Sunday afternoon with the current empolyees to discuss the closing and what the future holds.

The Deck will open in the former Ward’s location on Feb. 5.  The Deck has current locations in Columbia and Mt. Olive. This will be the fourth location and will be owned and operated by Greg Courtney.

“I will continue on to help close and take care of whatever business there is. It is genuinely bittersweet,” said Puckett.

“Patsy Speights said you will know when it’s time Shirley,” Puckett said with tears in her eyes.