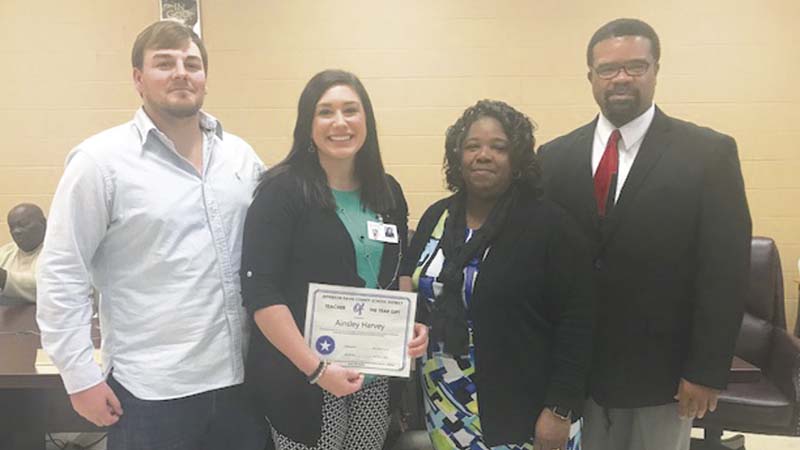 The Jefferson Davis County Teacher of the Year has been awarded to Ainsley Harvey.

Harvey is a kindergarten teacher at J.E. Johnson Elementary School.

She is a 2013 graduate of Prentiss Christian School and a 2016 graduate of the University of Southern Mississippi.

This is her second year teaching in Jefferson Davis County.

“This was the most caught off guard I think I have ever been in my life,” said Harvey.

“It is so awesome and I am so honored and glad to be a part of such a great district where everyone supports and uplifts each other.”

Dr. Su’Brina Mason presented Harvey with an award for the contributions to the academic achievement and personal growth of the students at J.E. Johnson Elementary School.

“I love teaching kindergarten age because they grow and mature so much in just one short year and I love being part of that growing and learning process with them,” said Harvey.

“I feel so greatly blessed to get to impact such great kids and be a part of such an important time in their lives. It is just all about the kids.”

LaTerrance Reese, a fourth grade math teacher, was chosen as the G.W. Carver teacher of the year.

“He is the epitome of greatness,” said Carver principal Dr. Crystal Haynes. “He goes above and beyond.”

“Ms. Sims is everything that the teacher of the year stands for and she truly puts children first and we are happy to have her on our campus,” said Jefferson Davis County High School principal Will Wheat.

“We thank you all for your hard work,” said JDC Superintendent Will Russell.

“We are very blessed and priviledged to have Mrs. Harvey and the other winners in our district teaching our children.”

The Jefferson Davis County Administrator of the Year was also awarded at the meeting. More on that award will be found in next week’s edition.