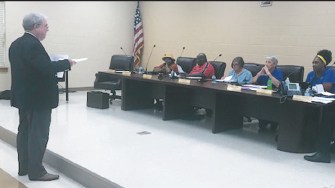 Photo by Holley Cochran/Financial attorney Jim Young presents two actions to the board regarding the vote for a bond to build a new high school. Both actions passed and a special election will be held Sept. 4.

Two actions regarding building a new high school were passed in the monthly Jefferson Davis County school board meeting held Monday at the Academic Success Center in Carson.

Jim Young, financial attorney for the board, presented the actions.

One was to adopt a resolution of intent to issue a bond, the second was to approve the bond election set for Sept. 4.

“We made a last minute change,” said Young. “We increased the principal to the amount of $14 million. That is the maximum amount. Less can always be issued, but you cannot issue more.”

“Exactly how much is issued is going to depend on all the facts and circumstances when we get around to the issue date. What the interest rates are doing, what the underwriters are interested in, the timing of construction and the estimated cost of construction,” he added. “The resolution of intent is pretty straightforward. It says we are going to issue the bonds in the amount of $14 million to do the project. We are not exceeding the debt limit by issuing the $14 million in bonds and that you intend on going forward with issuing the bonds assuming the election obtains the required 60 percent approval.”

A 60 percent approval is necessary in order for the bond to pass.

Approval to adopt resolution of intent to issue a general obligation bond was asked for by Norwood.

Bobby Wilson made the motion to adopt, Beulah Walker made the second.

Before the vote, Norwood asked for questions or concerns.

“I do not understand why we are in such a hurry. I think we are moving too fast,” said board member Terri Stamps.

“Mr. Young explained to us that there are timelines to follow. The Jefferson Davis County elections commission and the secretary of state have to have a certain number of days prior to an election to make sure everything is done and for us to fall within those parameters it needed to be handled today,” said Wilson.

“My concern is, I think that the community should have been more involved in the process,” said Norwood.

“I thought we were going to have a meeting in each district for the people to voice their concerns,” said Stamps.

“I think we have to do that if we intend to campaign for it and push the issue,” said Norwood.

“I think that will allow the public in our districts to know about what we are doing and ask for their support. If we don’t do that, I don’t think we will have a chance of it passing.”

“The chance of this going through without giving the people a voice, is very limited,” said Stamps.

“People want an opportunity to hear from Mr. Russell and the board and us be held accountable for the decisions that we are making.”

“We are moving forward,” said Russell. “The goal is to take the campaign to the community. That is to be done after the board approves the bond.”

“We are giving the community a voice, because they are the ones that get to vote.”

“There were some things that were discussed that we were going to put in place before we issued a bond,” said Norwood.

“We were going to see what kind of resources we could save. We also said that if and when that time comes, we would have included the community in some decision making.”

“So yes, we have talked about it, but I don’t think the process in which we discussed that we would follow, has been followed. I am not pleased with that and don’t necessarily agree with that, but I, again, will not hold up progress.”

“I agree with that,” said Stamps. “I think in order for this to pass we have one shot and one shot only. Timing is everything. I don’t think we have finished what we started.”

A vote was taken to adopt the resolution of intent. Norwood, Bass, Walker and Wilson voted for, Stamps voted against.

A motion to approve the bond election as presented was made by Wilson, seconded by Walker.

Norwood, Bass, Walker and Wilson voted for, Stamps voted against.

The special election will be held Sept. 4 to vote on a bond of 14 million dollars to build a new Jefferson Davis County High School on Hwy. 42 and S. J. Garner Road.