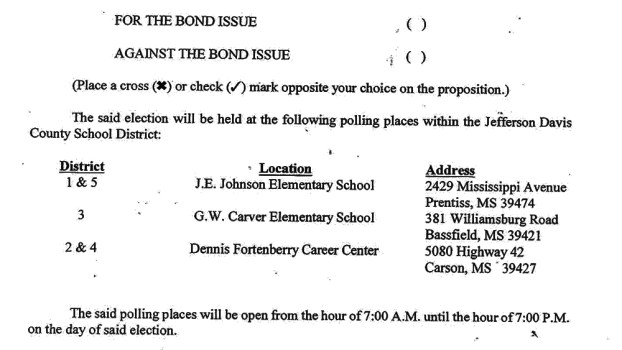 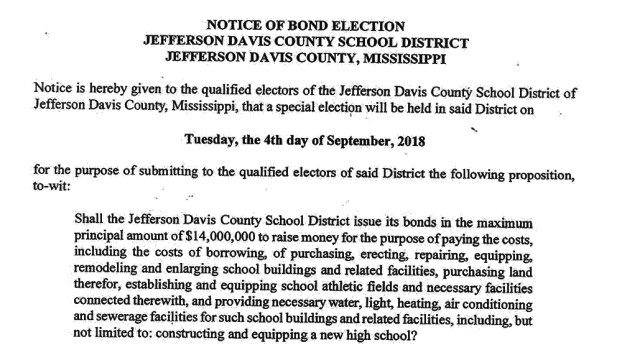 The Jefferson Davis County Board of Supervisors is not in favor of the school bond and special election that will be held Sept. 4.

In the regularly scheduled bi-monthly meeting Monday, the supervisors were presented with a resolution providing for calling and holding a special election with and for the Jefferson Davis County School District by elections commissioner Linda Speights.

This is the same resolution that was voted upon by the school board during their June meeting asking for a $14 million bond.

According to Speights, the election will cost the taxpayers $20,000. “It might cost more, but it won’t cost less,” said Speights.

“I am totally against it,” said supervisor Charles Reid.

“The transition went well from Prentiss to Bassfield. I was skeptical of that. But as far as spending $21 million dollars, the people in Jefferson Davis County can’t afford that kind of tax increase. I don’t care who is heading it up, but I am totally against the whole operation,” said Reid.

“I am against it too, said supervisor Bobby Rushing.

“I make a motion that I am against this resolution, the election and the new school, period,” said Rushing.

“We are letting the public know that we are against it. This is how we stand.”

“I think we are getting the cart ahead of the horse. I will not vote for something that is going to raise taxes on people that cannot afford it.”

“We have a lot of elderly people in this county and people on fixed incomes that absolutely cannot afford it.”

“And we have a lot of people on social security that pay taxes,” said Reid.

“We are concerned at this point about our bridge and road infrastructure and we don’t know what we are going to be looking at in repairs just to get the buses to get the children,” said Rushing.

“A building does not educate a child.”

“We are not making the decision for the school board, I want to make that perfectly clear,” said supervisor Michael Evans. “We have no jurisdiction over the school board and their decisions.”

“I asked superintendent Will Russell, to tell me why we have to have a special election on Sept. 4 and not on the general ballot in November. I asked if it was a strategy move, and Russell said. ‘yes, it is a strategy move.’ “Now that’s just wrong,” said Rushing.

The resolution states, that the Sept. 4 election will be held in the school buildings in the county instead of the polling precincts.

Polling locations will be open for voting from 7 a.m. until 7 p.m.

There will be up to seven precincts voting at each location. “If you are going to have an election to decide something this serious, why not have it at the polling places where everyone is familiar with,” said supervisor Corky Holliman.

“Why throw something new on them that they are not going to know where to go vote.”

“They have full control over whatever happens over this election,” said Speights.

“The poll workers, where they want to have it, who can certify it, all of it.”

“The superintendent should have called a meeting with us, said Rushing.

“We didn’t know a thing about this plan for a new school until we saw it in The Prentiss Headlight.”

“It’s not good to walk up to your constituents and not have a clue as to what’s going on when they ask,” said Evans.

“I want to bring peace to the situation and know what we are doing instead of the confusion. We need clarity.”

The board of supervisors called for a special meeting with the superintendent and school board in an effort to clear up the dissention.

“They are wanting to build a $21 million school, and I have sense enough to know that they don’t have the power, the water infrastructure or the sewer infrastructure,” said Rushing.

“You are going to have to build water wells, and a sewer treatment plant. I haven’t seen anything mentioned about the utility infrastructure.”

“I want to hear directly from them and what they are doing,” said Evans. All five supervisors voted against the resolution.

“Our voting doesn’t count toward anything, but we want the public to know this has nothing to do with the Jefferson Davis County Board of Supervisors and we are not in favor of what the school district is doing.” said Holliman.

The public meeting will be held in the Jefferson Davis County Courthouse on June 25, at 10 a.m.