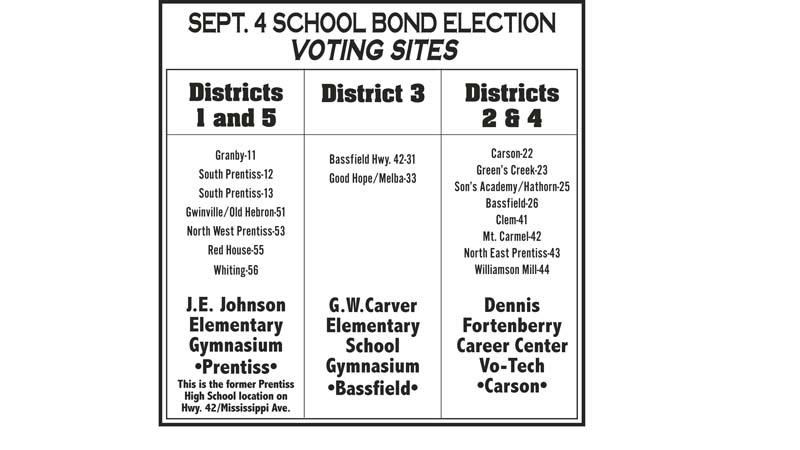 Absentee voting will continue through Sept. 1 at noon at the Jefferson Davis County Circuit Clerk’s office.

The circuit clerk’s office is open Monday through Friday from 8 a.m. – 5 p.m.

It will also be open this Saturday from 8 a.m. until noon.

Additionally, all mail-out ballots must be received in the circuit clerk’s post office box by noon Saturday.

Voters who do not vote absentee will cast their vote Sept. 4 at the designating polling location for their district.

Districts 1 and 5 will vote at J.E. Johnson Elementary School in the former Prent- iss High School building on Mississippi Avenue in Prentiss.

Districts 2 and 4 will vote at the Dennis Fortenberry Career Center, also known as the Vo-Tech, on Hwy. 42 in Carson.

All Sept. 4 voting locations will be handicap accessible and voters will be allowed to curbside vote if necessary.

“Nothing has changed with this election except where the votes are cast,” said elections commission- er Linda Speights.

“Everything will be run exactly the same as any other election.”

There will be nine poll workers at J.E. Johnson and the D. F. Career Center, and five at G.W. Carver.

This allows for four poll workers to be at each table and one to serve as bailiff at the door of the voting building.

Campaigning may not be done within 150 feet of a polling location, this in- cludes wearing T-shirts into the polls or carrying signs.

The JDC Elections Com- mission has placed signs on each of the customary polling locations directing voters to the new designated location for this special election.

“They will remain under lock and key until the morning of Sept. 4.

The Jefferson Davis County School District is asking for a bond in the amount of $14 million for the purpose of build- ing a new high school and athletic complex for grades 9-12 only at S. J. Garner Road in Carson.

According to the legal resolution, the bond will be for the purpose of pay- ing the costs, including the costs of borrowing, of purchasing, erecting, repairing, equipping, remodeling and enlarging school buildings and re- lated facilities, purchasing land therefor, estab- lishing and equipping school athletic fields and necessary facilities connected therewith, and providing necessary water, light, heating, air conditioning and sewerage facilities for such school buildings and related facilities, including but not limited to constructing and equipping a new high school.

If passed, the bond and interest will be paid by the citizens of Jefferson Davis County by way of taxes in the form of land taxes, mobile home taxes, personal property taxes and car tag taxes.

This will not include any change for the elementary (K-8) students at J.E. Johnson. Carver Elementary students (K-8) will be moved to the current Jefferson Da- vis County High School (formerly Bassfield High) if the bond passes and the new school is built.