School bond does not pass 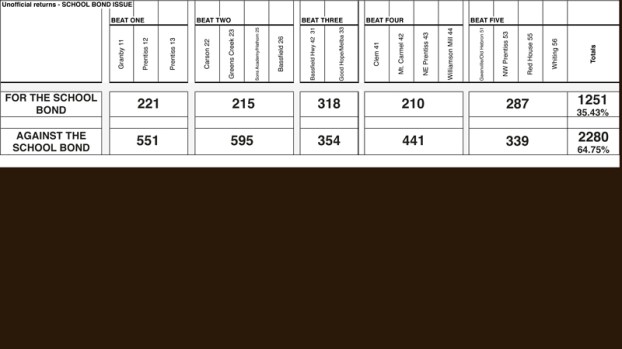 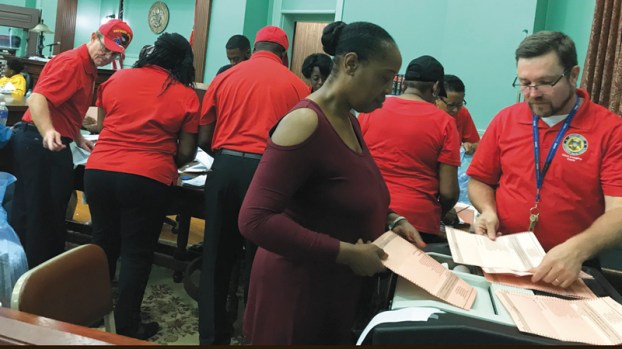 It was well after midnight before all votes had been counted and the results recorded in the special school bond election held Tuesday.

About 50 citizens and law enforcement officials waited until the final count was read.

Sixty percent of the vote was needed for the school bond issue to pass. It received 1,251 votes, which is 35.43 percent.

The Jefferson Davis County School District was asking for a bond in the amount of $14 million for the purpose of building a new high school and athletic complex for grades 9-12 only at S. J. Garner Road in Carson.

If the bond had passed, the bond and interest would have been paid by the citizens of Jefferson Davis County by way of taxes in the form of land taxes, mobile home taxes, personal property taxes and car tag taxes.

No portion of the bond would have been allotted for elementary students grades K-8.

“This was the first time we have had an election in locations other than normal voting precincts. It went as well as could have been expected.”

The reason for the long wait was due to the number of absentee ballots cast for this election.

“Each absentee ballot had to be hand fed into the machine so the computer could count the ballot and produce the totals.”

Several absentee ballots were counted by hand, after the machine was unable to read the vote.

Reasons for this would be if the circle was not completely shaded in, or there might have been a hole somewhere on the ballot.

There are 19 affidavit ballots that will be counted on Thursday, but will not affect the outcome of the election.

The Jefferson Davis County Circuit Clerk’s office will be closed Wednesday, along with all county buildings, due to inclement weather.