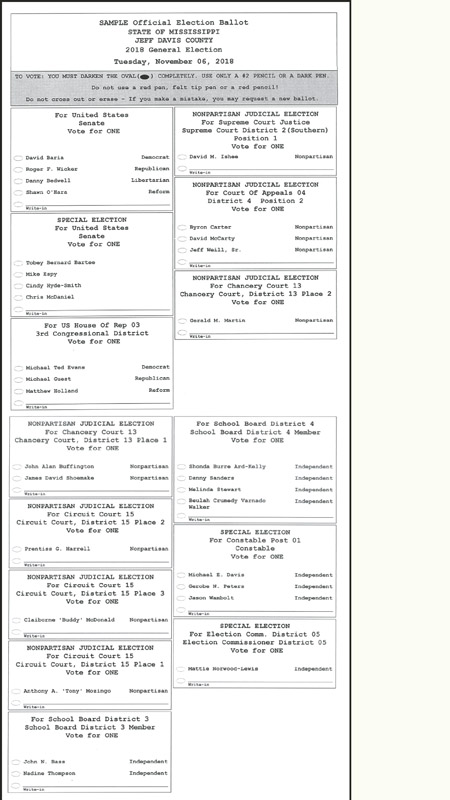 Absentee voting is now open for the Nov. 6 general election.

Several Jefferson Davis County positions will be on the ballot.

Voters in Districts 3 and 4 will be choosing a school board member.

Those qualifying in District 3 are John N. Bass and Nadine Thompson,

Shonda Buree Ard-Kelly, Danny Sanders, Melinda Stewart and Beulah Crumedy Varnado Walk- er are in the race for the District 4.

School board elections are on a rotating system. The winner of each district will serve a 6-year term.

Also on the ballot are two special elections.

One for constable Post 1 and one for District 5 elections commissioner.

Michael E. Davis, Gerobe N. Peters Sr. and Jason Wambolt are all vying for the constable position that was vacated by Zack Jackson. The winner will fulfill Jackson’s remaining term which is one year.

Also on the ballot is Chancery Judge District 13, Place 1. Runing for that position are John Alan Buffington and James David Shoemake.

Absentee ballots can be cast from 8 a.m.-5 p.m. Monday through Friday at the Jefferson Davis County Circuit Clerk’s office on Third Street in Prentiss.

The circuit clerk’s office will also be open Oct. 27 and Nov. 3 from 8 a.m.until noon for absen- tee voting.