Jackson is JDC Teacher of the Year 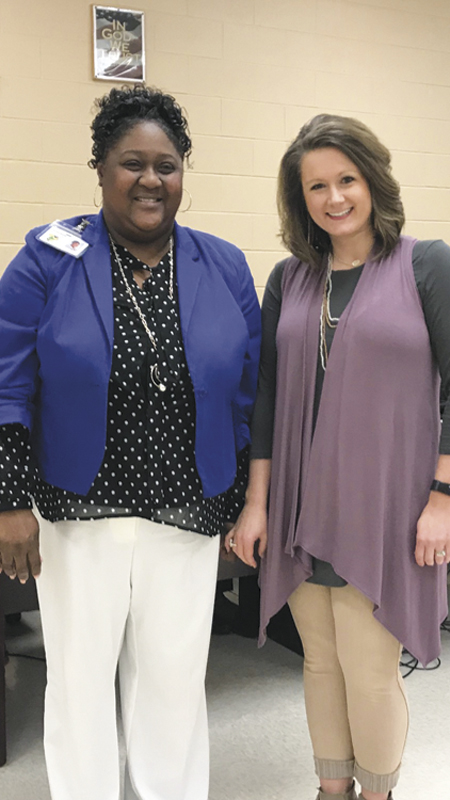 Jessica Bridges Jackson was named Jefferson Davis County Teacher of the Year at the first school board meeting of the year Monday night in Carson.

She is a 2010 graduate of Prentiss Christian School and a 2015 graduate of William Carey University.

This is her f ourth year teaching in Jefferson Davis County.

“It is a joy to know her. She is very jolly with her students and she is most definitely a jewel at G. W. Carver,” said Reese.

“Jessica is the epitome of what a great teacher should be,” said G.W Carver Principal Dr, Crystal Haynes.

“She is dedicated, hard working, punctual, compassionate and works hard every single day.”

“What I love most about her is that she was able to face adversity and she still loved and was passionate and did her job to the best of her ability.”

“She is absolutely awesome and we are lucky to have her. I am lucky to be her principal.”

Teacher of the Year for J.E. Johnson is Johnnel Stewart.

Stewart is the interventionist at J.E. Johnson, however, she recently stepped in as a Fourth and Fifth-grade math teacher due to the statewide teacher shortage.

“Stewart has such a big heart with so much love for her students and genuinely cares about their success,” said J. E. Johnson Principal Devonshae Harrien.

“We thank her for being our No. 1 team player.”

“She loves her students and is a great asset to Jefferson Davis County High School,” said JDCHS Principal Will Wheat.

“She is also the STAR teacher for JDCHS as well which is also a great honor.”

“We thank you all for your hard work,” said JDC Superintendent Will Russell.

“We are very blessed and priviledged to have Mrs. Jackson and the other winners in our district teaching our children.”

After the presentation of teachers of the year, the board elected officers for 2019.

Von Norwood will serve as president,  Terri Stamps as vice-president and Shonda Burre Ard-Kelly as sec./treas.

This was the first school board meeting for the two new school board members Shonda Burre Ard-Kelly and Nadine Thompson who were elected in Districts 3 and 4.

“I want to make sure the public understands every thing we do in these meetings,” said Thompson.

“I have been sitting in the audience before and felt confused and frustrated. I want us to be forthright with every thing that we do and I will be asking plenty of questions.”

Prentiss now has a safe zone