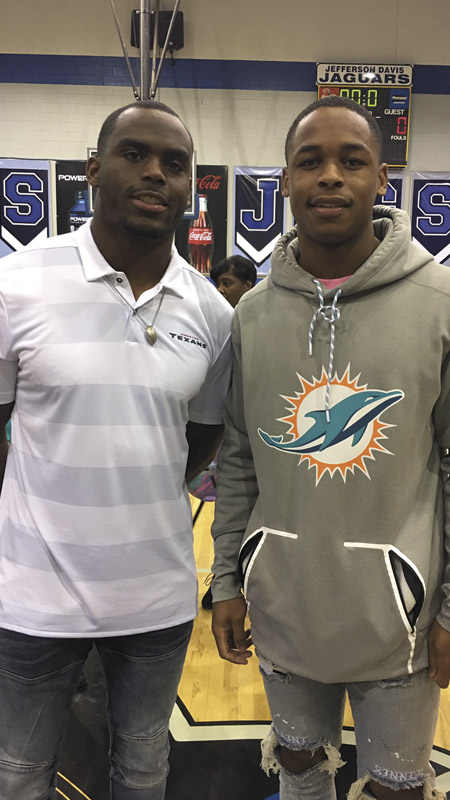 A. J. Moore and Cornell Armstrong: From Bassfield to the NFL

A.J. Moore and Cornell Armstrong, former Bassfield Yellowjackets, were
honored at Jefferson Davis County High School last Wednesday
afternoon.
Both just finished their rookie season in the NFL.
Moore recently went to the playoffs with the Houston Texans.
Miami Dolphins defensive back, Cornell Armstrong, became the first
Bassfield graduate to be drafted in the NFL.
Moore and Armstrong led the Yellowjackets to state championships in
2012 and 2013.
Moore went on to play at Ole Miss,  Armstrong at Southern Miss.
Before being introduced to the packed gynasium, JDCHS head football
coach Lance Mancuso addressed the crowd.
“It is a great honor to be standing here before you and to have these
two young men be here today to represent us,” said Mancuso.
“I also would like to give a special thanks to their family sitting
behind them.”
“If you ever wonder why these two young men are so successful, I can
promise you the main reason is sitting right behind them.”
“And that is the kind of upbringing and family that they had to make
sure they did the right thing.”
“I am so proud of these boys, but I want you all to know they were
just like you.”
“They sat right where you sat in the same classrooms, worked in the
same weightroom, but that alone wasn’t enough.”
“That wasn’t enough that they did what their teachers told them to do.
They are there because they did extra.”
“They believed that through hard work that they could accomplish their
biggest dreams. Both of them dreamed one day they would play for the
National Football League, and here they are.”
“The two young men have deserved everything they have gotten. They
have done it the right way and been a tremendous example for all of
you to follow.”
Several local elected officials spoke before each player had a turn at
the microphone.
“This means a lot,” said Moore. “That our family, community and town
all have been rooting for us, pulling for us and praying for us.”
“This is truly a blessing,” said Armstrong.
“To be out here and to see the love we are getting from the community.
To see everybody around that used to be at your Friday night games. It
means so much.”
The players signed autographs for the students in the crowd and were
available for pictures after the conclusion of the ceremony.
Since 2012, 33 players have played football at the Division 1 or
junior college level after graduating from Bassfield.
“All the blood, sweat and tears me and A.J., Curtis Mikell, Kam
Williams, C.J. Moore, all the guys. It’s just me and A.J. today, but
we got more on the way.”

Haynes is JDC Administrator of the Year

The Jefferson Davis County Administrator of the Year was awarded to Dr. Crystal Haynes at the January school board meeting... read more