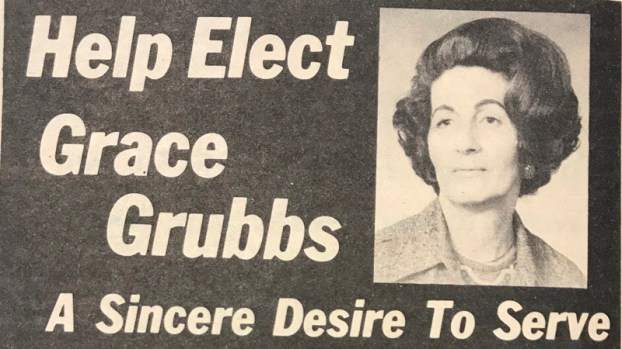 The Prentiss Headlight—A photo of Grace Grubbs from an ad in the Prentiss Headlight dated July 31, 1975. The ad read “A sincere desire to serve.” She was elected Jefferson Davis County Tax Assessor and Collector three weeks later and has served the community since. 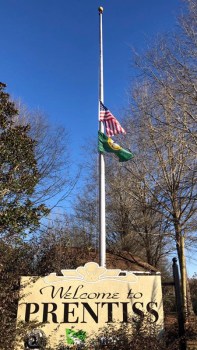 Flags were lowered last Wednesday until Monday at sunset in
remembrance of the life and service of Grace Grubbs, former tax
assessor and collector of Jefferson Davis County.
Grubbs died Jan. 23, after complications from surgery.
“Few have demonstrated the love of her community as Mrs. Grace,” said
Prentiss Mayor Charley Dumas.
“We will miss that love, as well as her friendship, wisdom and the
very example she set for others.”
“She not only made Prentiss better, but everyone who knew her as well.”
After moving to Prentiss with her husband Earl, Grubbs worked for the
Bank of Blountville and then the Bank of Prentiss.
In 1975, was elected tax assessor/collector for Jefferson Davis County
and served for 20 years.
She also served as president of the Mississippi Tax Assessor
Association in 1984.
She was a charter member of the 20th Century Club and was selected
twice as the Woman of the Year by the Jefferson Davis County Chamber
of Commerce.
The Eureka Arts Federated Club recognized Grubbs with the Legacy of
Women’s Leadership Award in 2013.
At age 90, she was honored by the University of Southern Mississippi
as an avid fan and a 40-year Golden Eagle season ticket holder.
She a member of Prentiss Baptist Church where she was a trustee,
chairperson of numerous committees and active in the Women’s
Missionary Union.
“True leaders don’t create followers, they create more leaders,” said
Jefferson Davis Tax Assessor and Collector Kelley Ross-Brown.
“It was an honor working with Mrs. Grace. She always told me she was
just a phone call away.”
Funeral services for Grubbs were held Monday at Prentiss Baptist Church.