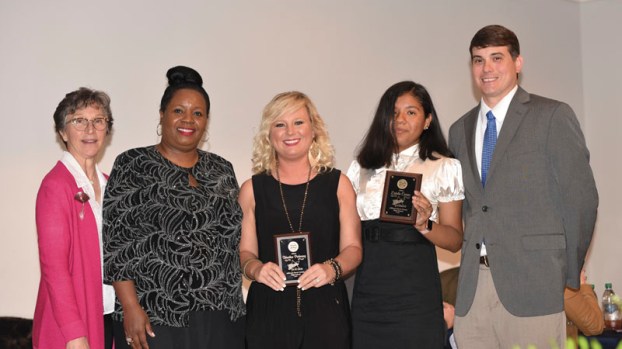 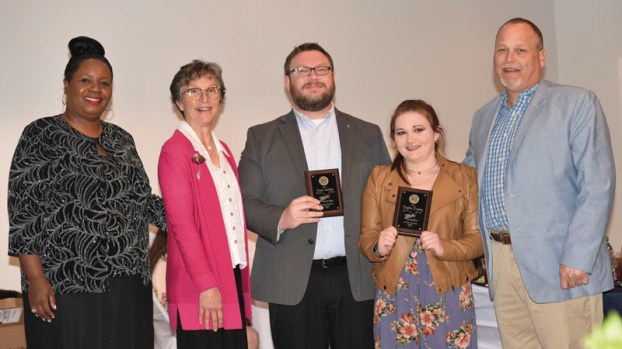 Star Student and Star Teacher awards were presented at the conclusion
Chamber Partnership Banquet on March 26.
Star Student for Prentiss Christian School is Taylor Essary.
Essary is the daughter of Clay and Melissa Essary.
She has been a student at Prentiss Christian School since first grade.
She is a member of Sure Anchor Baptist Church. She has been a member
of the PCS Honor Society since 10th grade.
She was a member of the PCS drill team for three years and a PCS
varsity cheerleader her senior year.
Essary scored a 30 on the ACT. She will attend Mississippi State
University in the fall and study pre-veterinary medicine.
Essary chose Kevin Walker as her Star Teacher.
Walker has been teaching at Prentiss Christian since 2011.
He teaches 12th grade Bible, 10th grade English, and Spanish I and II.
He holds a bachelor’s degree in English from Mississippi College and a
master’s in educational leadership from Arkansas State University.
Walker serves as PCS Honor Society sponsor, organies the PCS Spiritual
Emphasis program and coaches the golf team, among other
responsibilities.
He has been the pastor of Mendenhall Church of God for the past 10
years and is an ordained bishop in the Church of God denomination.
He and his wife, Heather, have three children, Mattie, Allie and Jack.
“Four years ago at this very banquet, there was not a Star Student
represented from Jefferson Davis County,” said Jefferson Davis County
High principal Will Wheat.
“When I became principal of then Bassfield HIgh School, Superintendent
Russell charged me to fix this issue.”
“For three straight years since, we have had a Star Student representative.”
Estella Casas is the Star Student for Jefferson Davis County High School.
Casas scored at 28 on the ACT and is ranked third in her graduating class.
She is in a graduating class that has six students who meet the
minimum qualifications for Star Student.
Casas took the ACT as many times necessary to achieve her goal of Star
Student. Her highest subscore was a 31 in English.
Casas will attend Mississippi State University in the fall studying
pre-med biology and will have accumulated 24 hours of dual enrollment
by the time she attends college.
Casas chose Heather Pickering as her Star Teacher.
Pickering is a history teacher at Jefferson Davis County High School.