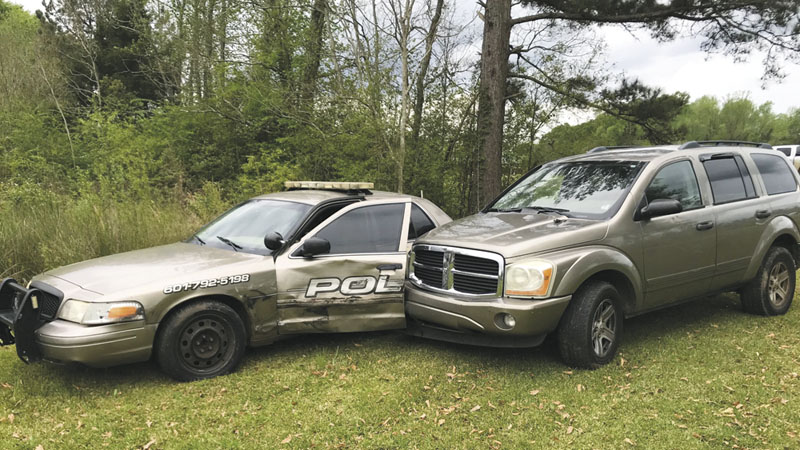 Holley Cochran / The Prentiss Headlight—Prentiss police officer Pat Barnes was involved in a hit and run following a high speed chase in Prentiss Sunday afternoon. The subject was apprehended Monday morning and booked into the Jefferson Davis County jail.

Prentiss police officers were involved in a high speed chase Sunday
afternoon in Prentiss.
Det. Richard Browning attempted to pull over a Dodge Durango on
Columbia Avenue for an expired tag.
The driver of the Durango pulled through the Valero and onto Hwy. 184.
After crossing Hwy. 42 and 13 north, Officer Pat Barnes joined in the pursuit.
The suspect attempted to run Barnes off the road, but eventually was
stopped just off  Hwy. 184 at the Hwy. 13 intersection.
The suspect fled on foot into the woods and was not immediately captured.
Drug paraphernalia was found beside the Durango after the suspect
jumped out of the vehicle.
The officers received only minor injuries.
The Prentiss Police Department received an anonymous call that there
was a suspicious person behind Spaceway Monday morning.
When Det. Browning arrived the suspect fled again down Mississippi St.
and was captured in the Quinn Gardens area.
Officers arrested Casey Joe Jones, 27, of Foxworth.
Jones was charged with felony fleeing, aggravated assault on a police
officer, felony malicious mischief, no drivers license, no insurance,
expired tag, resisting arrest and  possession of drug paraphernalia.