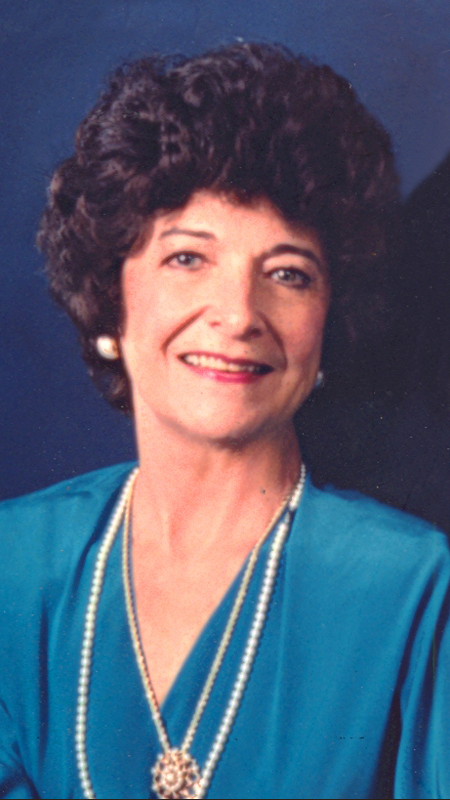 Services were held at 11 a.m. June 14, 2019, at Prentiss Presbyterian
Church for Betty Williams Farr Kruger, 83, who died June 7, 2019, at
The Blake at Flowood.
Dr. C. Baxter Kruger and Dr. F.W. Tripp officiated.
Saulters Funeral Home was in charge of arrangements. Burial was in the
Prentiss Cemetery.
Pallbearers were her grandsons, Stephen Paul Kruger Jr., Edward Andrew
Kruger, Peter Glenn Kruger, Philip Wade Kruger, James Edward Baxter
Kruger and Robert Wilson Kruger.
Mrs. Kruger was born in Prentiss on Nov. 13, 1935, to Thelma Williams
Farr and Paul Hollis Farr Sr.
She was a 1952 graduate of Prentiss High School where she was elected
Football Queen, Most Beautiful and Best Personality, and served as a
cheerleader and majorette.
She attended Belhaven College, where she was a member of the Sock and
Buskin Theater Company before transferring to Mississippi Southern
College, where she was a member of Kappa Delta Sorority and Alpha Psi
Omega dramatic fraternity, and was a Kappa Sigma Bathing Beauty and
Southern Belle.
While at Mississippi Southern, she met Donald Glenn Kruger, who would
become her husband of 63 years.
During this time, she served as Prentiss’ Miss Hospitality in the
State pageant and had a role in the movie Jessie James’ Women filmed
in Silver Creek.
Mrs. Kruger attended the University of Mississippi and was President
of the Legal Law Wives while her husband was in law school there.
While in Oxford, she was featured in television and radio commercials
and continued her education in speech therapy.
Mrs. Kruger served as the National Committee Woman for the Young
Democrats and was featured in Time Magazine with President Kennedy
after he made a trip to Jackson to speak to the Mississippi Young
Democrats.
She completed her education at the University of Southern Mississippi
with a degree in speech communication and therapy and worked at the
Crippled Children’s Clinic in Laurel. While there, she helped set up a
clinic at Charity Hospital, before the family moved home to Prentiss.
For over a decade, she worked to improve the speech of countless
children in Brookhaven and Lincoln County at Mamie Martin and
Brookhaven Elementary Schools.
Mrs. Kruger was an active member of Prentiss Presbyterian Church where
she taught Sunday School and Bible School.
As a den mother, she received the district Pine Burr award for
outstanding service and was recognized by the National Court of Honor
of the Boy Scouts of America with the Silver Fawn Award.
She was the chairman of the Jefferson Davis County Heart Fund and
received a Mississippi Heart Association bronze service recognition
medallion for her outstanding leadership.
Mrs. Kruger served as President of the Prentiss Christian School PTA
and on the boards of Prentiss Main Street and For the Love of
Prentiss.
She was an avid gourmet cook and enjoyed reading widely.
Mrs. Kruger is survived by three sons; Stephen Paul Kruger (Phoebe) of
Jackson, Charles Baxter Kruger (Beth) of Brandon, and Stuart Glenn
Kruger of Ridgeland; one daughter, Holley Kruger Cochran of Prentiss,
12 grandchildren, six great-grandchildren and one brother, Paul Hollis
Farr, Jr. (Carolyn).
She was preceded in death by her husband, Donald Glenn Kruger; parents
Thelma Williams Farr Baxter, Paul Hollis Farr Sr., and James Edward
Baxter; and granddaughter Caroline Williams Kruger.
Memorials may be made to Perichoresis, P.O. Box 98157, Jackson, MS 39298.